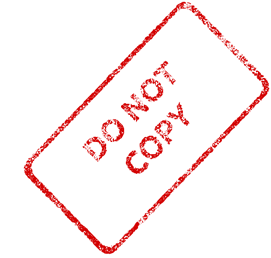 Accusations of plagiarism have once again been made against author, speaker, and website publisher, Barry Ewell.

Other parts are obvious copies as well. The list of denominational archives on pp. 81-2 of Barry’s book is such an exact copy of the list at http://www.byub.org/ancestors/records/religious/extra.html, he even copied the alphabetization problems of the BYU website.

Barry Ewell has also copied information from the web for newspaper articles. On 27 April 2013, the Salt Lake City Deseret News published a story written by Barry Ewell titled “Genealogy: Use and Record What You Learn.” The editor has appended this notice:

Editor's note: The original version of this story posted on April 27, 2013, failed to properly attribute all source materials, which violates our editorial policies. The story was revised on March 19, 2014, and attribution to original sources were added. A version of this column also appeared in the print edition of the Deseret News on August 8, 2013. The Deseret News demands accuracy in attribution and sourcing and considers any lapses to be a serious breach of ethics. The Deseret News is no longer publishing Barry J. Ewell's writings. (http://www.deseretnews.com/article/865579049)

That story presently attributes information to a FamilySearch wiki article, “A Guide to Research.” (https://familysearch.org/wiki/en/A_Guide_to_Research)

The Deseret News published another Barry Ewell article on 7 September 2013 (“Use Your Camera to Document Family History Research”) which now bears the same notice (http://www.deseretnews.com/article/865585957). That story presently attributes information to a Dennis Ridenour article published in the 1 February 2003 issue of UpFront with NGS newsletter (http://archiver.rootsweb.ancestry.com/th/read/NGS/2003-02/1044160664) and a Maureen Taylor article, “Tips for Photographing Gravestones: Documenting Without Damage” (http://www.genealogy.com/articles/research/64_gravestones.html).

The Deseret News published another Barry Ewell article on 14 September 2013 (“Share Oral History Between Generations”) which now bears the same notice (http://www.deseretnews.com/article/865586360). That story presently contains one unattributed quote and attributes a FamilySearch wiki article, “Involve Children and Youth in Family History” (https://familysearch.org/wiki/en/Involve_Children_and_Youth_in_Family_History). Ironically, an Iranian website plagiarized Barry’s original article, should you wish to read it. (Google search for “ever be grateful that I was able to visit my relatives in Iceland.”)

Barry Ewell has also copied information from the web for his videos, according to Thomas MacEntee in a 10 March 2014 article titled “Plagiarism: A Venereal Disease in the Genealogy Community” (http://www.geneabloggers.com/genealogy-plagiarism-venereal-disease/).

One trick that Ewell uses is to embed content in videos – content which is not easy to compare with an original source since much of it is in the form of audio or images: Listen to the audio at http://genealogybybarry.com/7-slideshow-series/arician-american-research/ and then read http://www.prattlibrary.org/locations/afam/index.aspx?id=3000#Why.

On 6 July 2013, DearMYRTLE published an example alleging Barry Ewell had plagiarized Cyndi Howells’ interview on the Ancestors television show. (See “Is There Such a Thing as Ethical Plagiarism?” on DearMyrtle: Your Friend in Genealogy Since 1995.)

Barry also copies other people’s information for his blog. Consider a single article, “Sharing Family History: Write and Share Your Story” (http://genealogybybarry.com/sharing-family-history-3-write-share-story/ : 21 November 2015). As of the date of this writing, none have attribution even though Barry copied the entire article almost word-for-word.

These examples have been easy to find, but I’ve run out of time. I will leave you with one final example.

Michael Hait reported on 7 July 2013 that some of his work had been plagiarized by Barry Ewell. (See “Copyright, Plagiarism, and Citing Your Sources” on Planting the Seeds: Genealogy as Profession.) In the slides attached to the blog post, he presented side by side comparisons to illustrate the plagiarism. For example, one set of slides shows this:

After 26 slides of comparisons, Michael asks, “Plagiarism? You Be the Judge.”

Note: Sources are either cited inline or, in the cases of examples from other websites, cited in those respective articles. All websites were accessed the weekend of 27 March 2016. The illustration comes from Merlin2525, “Do Not Copy Business Stamp 2,” Openclipart (https://openclipart.org/detail/172061).