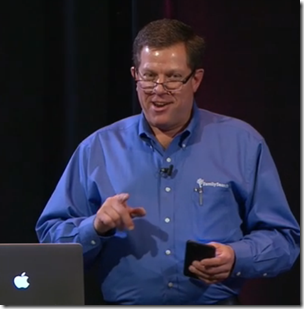 “This is an industry in transformation,” Robert Kehrer said.

Robert Kehrer presented the FamilySearch sponsored luncheon on Thursday at RootsTech. Robert is the product manager for Search. He talked about transformations. I’ve reported before on this presentation (see “Kehrer Talks FamilySearch Transformations – #BYUFHGC,” 29 July 2015) so I’ll skip some of what he said.

Robert has witnessed transformations in two previous careers: DNA and Apple. Now at FamilySearch, he’s witnessing another. “My goal is to give you a taste of the transformation that’s been happening,” he said.

The transformation in records:

The transformation in memories—photos, stories, and digitized documents—started in 2013. Since then users have uploaded over 13 million artifacts. Approximately 20,000 are added per day, of which 76% get attached to Family Tree. Robert showed a story he entered, “Franklin Bernard Allor in Car Accident Dec 7 1941,” about an ancestor. 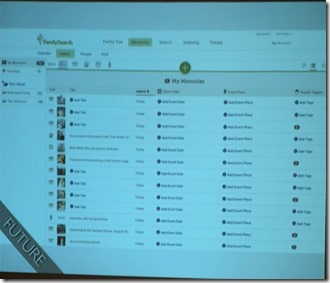 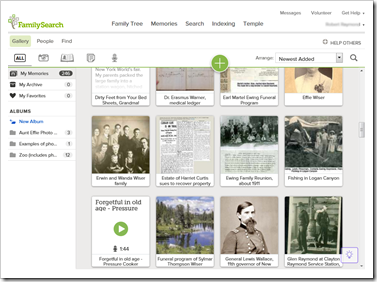 The transformation in indexing:

The new, web-based indexing program is being rolled out even while it is still being worked on. Someone asked when it would finally be available and everyone laughed. Robert declined to answer, since he is not the indexing product manager. Jason Pierson is the product manager.

FamilySearch is contemplating tools that would speed up certain aspects of indexing. Robert showed a wireframe of a tool where the indexer would be given one, simple task that required just a tap. The user would look at the image and tap to indicate the record type: birth, marriage, death, or other. (Below, left.) With as little information as record type, geography, and date range, blocks of images could be suggested alongside search results of indexed records. 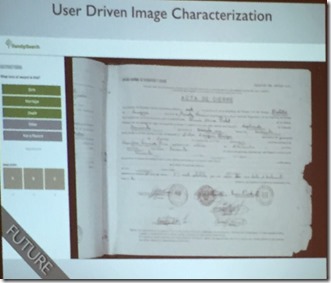 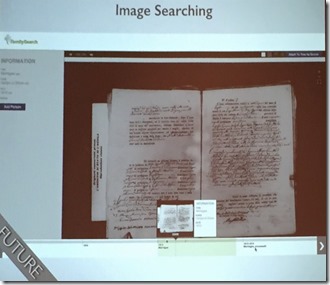 Robert showed another wireframe (above, right) that allowed quick perusal of images. As you moved a slider along the bottom you would see popup thumbnails and basic date and place information. The slider might also include date and place ranges. If you found a name you wanted indexed, you immediately indexed it. Robert called it indexing on the fly.

The transformation in hinting:

The transformation in Family Tree:

The transformation in mobile apps:

The transformation in partnering:

The future of partnering is bringing hundreds of millions of new records (774 million).

“You know the old curse that says ‘May you live in interesting times’?” Robert asked. “I wouldn’t have it any other way. These are the most interesting times we’ve ever seen in the genealogy market.”