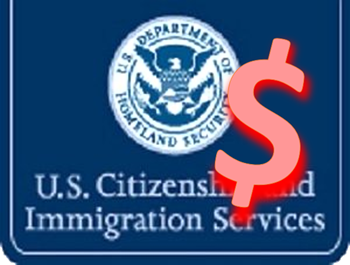 On 25 December 2016 I received an email from the U.S. Citizenship and Immigration Services warning of an upcoming fee increase, to be effective 23 December 2016. Yup. Two days before they sent the email. That’s your government at work. The new fee schedule webpage states:

This chart lists USCIS' fees effective December 23, 2016. Applications and petitions postmarked or filed on or after December 23, 2016, must include these new fees or USCIS will reject your submission.

Filing fees increased for most forms, and we published updated versions of the forms at uscis.gov/forms. We strongly encourage customers to download and submit these new versions, which are updated with the new fees and have an edition date of 12/23/16. We will accept prior versions of forms, with the exception of Form N-400, until February 21, 2017. However, all filings postmarked December 23, 2016, or later must include the new fees or we will reject them.

The email explained that:

Our agency is funded almost entirely by fees. By law, we conduct a fee review every two years to ensure that we recover the full cost of processing immigration benefits. The Genealogy program has not increased its fees since the program was created in 2008.

If you have any questions, please write to Genealogy.USCIS@uscis.dhs.gov.