Modification of an image
© 2005, The Facey Family
Some rights reserved.

Holidays, Blogger's Day, and the Vault series have put me way behind. To ketchup, here’s several FamilySearch and Ancestry.com  news items.

The Genealogue wasn’t feeling the love when he wasn’t invited to Ancestry.com. In retaliation, the hilariously funny blogger penned his, “Top Ten Reasons I’m Not Attending Blogger Day 2010.” A minor warning to my most-conservative readers: if you find Conan O’Brian offensive, if Jay Leno or David Letterman occasionally cross the line, or if the Ancestry Insider’s humor has ever made you uncomfortable, some of Chris Dunham’s humor may also do the same. But if my warning only enhances your desire to check him out, you’ll definitely want to avail yourself of the “Top Ten Lists” link in The Genealogue website header.

James Anderson posted a newsy item on FHCNET last month with a bunch of insider rumors he’d heard during a meeting for community volunteers working on the FamilySearch Wiki.

Speaking of magazines, a new magazine, Mormon Entrepreneur, is featuring in the current issue several successful Family History entrepreneurs and companies that you may be familiar with. Obviously, some material may target members of the Church of Jesus Christ of Latter-day Saints (the Mormons) or at least to New FamilySearch users. But most of it is of interest to anybody in genealogy. Paul Allen made the cover. The magazine is online only, so there is no center fold. In this, the third issue, you’ll find:

All you literary folk already know about William Wordsworth’s poem, “We are Seven.” But I discovered it only recently. I think because I am a genealogist—and because I believe in eternal families—I found the poem strangely poignant. Read it on the Google Books website.

Wildcard Basics. There are two wildcard characters: the question mark and the asterisk. Use a question mark in place of a letter when a name can be spelled with alternate letters at that spot. For example, Nels?n will match Nelson and Nelsen. Use an asterisk when the alternatives are of different lengths. For example, to match Abbot and Abbott, use Abbo*. Don’t be surprised if the asterisk matches names that you hadn’t thought of, such as Abbordanddo for Abbo*. An interesting quirk of the asterisk wildcard is that it can also match zero letters. So Abbo* will also match Abbo. You can use this to your advantage, however. You could search for Abbot*. The same is NOT true for the question mark. If you use one, there MUST be a letter at that spot.

With the improvements, now the three regular letters can be anywhere, such as Ra*d. And a name can begin with a wildcard, like *ieffer, as well as end with one, like Jens*. However, you are not allowed to have wildcards at both beginning and ending. 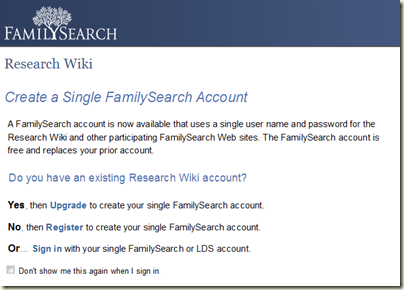 Now might be the best opportunity you’ll have to register the login name of your dreams. The login name you claim will eventually be used across all FamilySearch websites. Registration is open to all, regardless of membership in the Church.

Near the end of December, DearMYRTLE discovered a flaw in Ancestry.com’s “View Maps” feature. Genealogists have long included county names along with locality and state names.

Some localities are divided by county lines, such as Franklin Park, New Jersey, which is bisected by the Middlesex/Somerset county line. Sometimes separate localities share one name when separated by a boundary, such as Wendover, Utah and Wendover, Nevada. And some names are just plain duplicates, like the nine Springfield Townships of Pennsylvania.

The problem comes when Ancestry.com passes a location name to Bing.com for placement on a map. The mapping software expects “street, city, state” instead of “city, county, state.” If it can find a location matching this misinterpretation, it places the location there. DearMYRTLE found that “Wenatchee, Chelan, Washington” was interpreted as a location in Chelan City rather than Chelan County.

I tried to reproduce the problem last night and found another error. Actually, clicking the “View Maps” link from a census record worked correctly. Perhaps Ancestry.com fixed the problem DearMYRTLE found. But when I clicked on locations in a tree, I got “Server Error: UserAccount service failed to log you in”. Perhaps this was a temporary condition last night. Or perhaps in fixing DearMYRTLE’s bug, they broke something else.

John Vilburn announced on FHCNET that PAF Pal is now available for free. He says,

Steve Cannon, the developer of PAF Pal, passed away a few years ago. He was a good programmer and a good friend.

PAF Pal was designed with the old TempleReady workflow in mind, although some of its functionality continues to be useful in some situations. Now that new FamilySearch is being used by so many people, we have contacted Steve's family and they have agreed to allow us to offer PAF Pal at no cost. To get your copy, go to www.ohanasoftware.com and click on the Purchase menu. Scroll down to find the free license for PAF Pal. Once you have your license you can download PAF Pal by going to the Download menu and choosing the Freeware/Shareware link.

PAF Pal is an add-on program for PAF 5. It can expand or abbreviate US states, Canadian provinces, and Great Britain counties. It can add or remove “USA” or “U.S.A.” It can do search and replace parts of names, parts of notes, and LDS temple codes. It enables searches for Ancestry.com, Genealogy.com, and RootsWeb.com. And it can print lists and reports. It can clear custom ID fields, Ancestral File Numbers, or all LDS fields. It can even play the songs that were included in PAF version 2.

Thank you to John and the Cannon family.

I’m out of time, but not out of news…