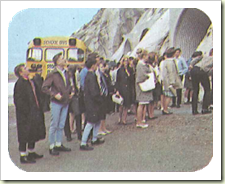 The public were invited to tour the awesome caverns of the Granite Mountain Record Vault (GMRV) starting 4 December 1963. After the open house, the vault would be closed to the public.

Storage vaults were constructed between about 120 and 350 feet into the mountain. Each of six vaults is about 200 feet long, extending 27 feet wide, and reaching over 15 feet high. The tunnels were lined with heavy corrugated steel and concrete was pumped in to fill the space between the steel and the granite tunnel walls.

The tour is included in your conference registration for no extra cost. For a sneak peak of what you will see on the tour, click this link and then click the play button.