“Genealogy at a Glance” Reviews

I imagine Genealogical Publishing Company (GPC) has made a lot of money selling Elizabeth Shown Mills 4 page, laminated citation guides. Their “Genealogy at a Glance” series appears to be an attempt to capitalize on this format. GPC recently sent me two of the three guides in the series, Scottish Genealogy Research by David Dobson and French-Canadian Genealogy Research by Denise R. Larson.

They describe the guides this way (underline added):

Designed to cover the basic elements of genealogical research in just four pages, the “Genealogy at a Glance” series attempts to give you as much useful information in the space allotted as you’ll ever need. In less than a handful of pages (specially laminated for heavy use) it provides an overview of the facts you need to know in order to begin and proceed successfully with your research, allowing you to grasp the basics of research at a glance.

The underlined text immediately jumped off the brochure as marketing doublespeak. I could hear the booming voice of the announcer, “As much useful information as you’ll ever need!” Followed by the fast-talking, soft spoken disclaimer, “in the space allotted.”

Four pages “to begin and proceed successfully” doing Scottish or French-Canadian research? I don’t think so. Plugging in my computer required a poster four times this size. Putting together my bookshelf took sixteen pages.

Neither were laminated. They didn’t need to be. Once the computer was plugged in, I tossed the Getting Started.

I think four laminated pages is a great format for a continuously used, “at a glance,” reference guides. But I question if this format adequately communicates “the facts you need to know in order to begin and proceed successfully.”

I’m not qualified to review Scottish or French-Canadian research, so I asked two friends for help. The reviews were mixed: thumbs up for one of the guides, thumbs down for the other.

My only contribution was noting that the “Quick Facts” section consuming a fourth of the front page of both guides was a big waste of very precious space. Knowing the number of people in the 2000 U.S. census with Scottish or French-Canadian ancestry might have been an important fact for GPC decision makers projecting how well these guides would sell. It hardly helps you “begin and proceed successfully with your research.”

On to the good news and the bad news…

Which do you want first? 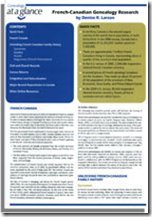 My French-Canadian reviewer thought it sad that he had to give a bad review on something that Denise R. Larson had obviously put so much thought, work, and effort into. He thought that if Genealogical Publishing had performed a peer review of this piece, it could have been so much more.

He thought the information was very much dated, perhaps as much as ten years behind the times. He thought the websites mentioned were generics instead of the ones you really need: Ancestry.com, FamilySearch.org (with new online collections), www.bms2000.org, and www.fichierorigine.com.

Larson also failed to direct her audience to the most important records. Church records were mentioned, but not highlighted. She barely mentioned the University of Montreal and the PRDH. The information about the Drouin collection failed to mention online availability.

Sad that he couldn’t recommend it, my friend was nevertheless adamant that this guide is not useful to an experienced researcher and is totally inappropriate for a new one. 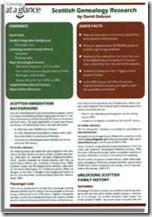 My Scottish reviewer told me he already owns quite a few of David Dobson’s immigration books. Dobson is the name in Scottish immigration. Dobson has scoured many government records and is unquestionably the expert. My friend said the important www.scotlandspeople.gov.uk and OPR records were covered well.

He thought the author had overlooked Ancestry (somewhat hidden on the first page) and Find My Past. And he thought Dobson should have mentioned the availability of most of these records on FamilySearch microfilm.

My friend didn’t think the guide was a research strategy, but a reference to the best sources for Scottish research. He liked Scottish Genealogy Research so much, he asked me where he could get a copy for himself. That is a definite thumbs up.