I have no time. I’m way behind on articles. Time to ketchup…

Who Do You Think You Are? is back for a second season, starting this Friday night on NBC. Vanessa Williams kicks off this season. Watch this show to make it a success so we can interest more people in genealogy.

I’m going to start a rumor, here and now. Ladies and gentlemen, you heard it here first. Ancestry.com is a major sponsor of WDYTYA. I wonder if it was cheaper for Ancestry.com to buy ProGenealogists rather than pay for WDYTYA research. That, in turn, seems to have killed Expert Connect. 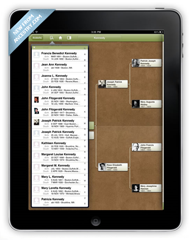 You all probably make me as an iPhone kind-of guy. To be honest, I don’t have an iPhone or an iPad. This new Ancestry.com app, however, is too much. I gotta get me one of these! Learn more on the Ancestry.com website.

A Canadian man is organizing a grassroots campaign to use Super Bowl Sunday to break the single day FamilySearch indexing record. Ken Sisler wants everyone to index as they watch the game, or don’t watch the game, as the case may be. He has created a Facebook Event to help promote the effort.

Consume at your own risk

The rest of this ketchup has been sitting around since before October 2010. Be careful. Consume at your own risk. It may be rancid.

Ancestry.com seems to be doing a good job of competitive analysis. There new tree views are similar to the new FamilySearch tree’s. See “Member Trees: A New Way to View Your Ancestry.com Member Tree.”

Ancestry.com has given in on another point which made long-time subscribers reject their 2008 New Search. See “Ancestry Search: Searching using Birth, Death and other Life Events.”

Funeral home industry promoters have a website called iMortuary.com. Hoping to draw visitors, they've informed various bloggers about an online graphic containing interesting facts. What they don't realize, is that their nation-wide directory of funeral homes is, of itself, a draw for genealogists. For more information, read “Grave curiosities.”

Ancestry.com New Photo Upload Tool The old photo upload utility was buggy, difficult to use, security sensitive—and lightning fast. I was sad to see it go.

Ancestry.com released a cool new feature called Suggested Records. When you view the index page for some records, Ancestry.com will suggest other records that might refer to the same person. This new feature is good both for Ancestry.com haters and subscribers, alike. Ancestry.com takes the efforts of paying subscribers—saving records into their personal trees—and leverages it to make money by providing suggestions to other subscribers. I call this the Amazon Model. (I notice back in October 2007 I said to stay tuned, meaning I would explain later what I meant. Well, stay tuned…)

FamilySearch has released a DVD of Jay Verkler’s NGS conference keynote, “Coming of Age,” including the video tour of the Granite Mountain Record Vault. If you didn’t happen to pick up a copy at the FGS conference, you can order one online at http://store.familysearch.org for $4.50. The “Celebration of Family History” from NGS is also available for the same price.

But if you just want to watch the video clips, you can find them on FamilySearch’s YouTube channel.

Ancestry Labs is a place where we post experimental projects to gather user input. This is a part of the site that will allow us to test new ideas and concepts, give you a preview of what we’re thinking for the future, and allow us to hear feedback directly from you.

The projects we place in this area are likely to be early prototypes, and although some of them may make their way into the main Ancestry site, some may not. Please explore our current projects and share your feedback.

The first project on Ancestry Labs was PersonView. Check it out at www.ancestry.com/labs. Read more in the announcement from Tony Macklin.

Following the announcement of the partnership, FamilySearch issued a statement clarifying access to indexes and images. See “Indexed Records to Remain Free on FamilySearch.org.” The statement announced that free access to the images would be available to “FamilySearch members” in 2009. Obviously, that didn’t happen. Now we’re into 2011 and it still hasn’t happened.

Do you think Ancestry.com is shaking in their boots worrying about FamilySearch putting them out of business?

FamilySearch took a page from the Ancestry.com playbook and held its first Blogger Day. (OK. That ketchup was rather old and rancid. But I wrote it four months ago, and still needed it to balance the item earlier about Ancestry.com taking a page from FamilySearch’s playbook.)

I’ve been asked what a system origin of “EASy” means when it appears in some historic records on the FamilySearch beta. For an example, see the record for Anna Pereira, baptized 19 Mar 1783 in São Luiz Rei, Mostardas, Rio Grande do Sul, Brazil, in the “Brazil Baptisms, 1688-1935” collection. According to the FamilySearch website, EASy stands for Extraction Administration System. This is the system used prior to FamilySearch Indexing.

Once again, I barely made a dent in my backlog. It seems like I do this every time. Come to think of it, am I reliving this same day, over and over again?