RootsTech Expo Hall is a Winner 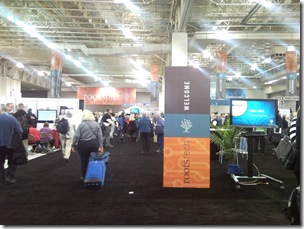 The RootsTech conference goal of bringing together technology users and technology producers was nowhere more evident as in the Expo Hall.

“We want to merge the two and see if we can’t drive innovation in the genealogy world,” said Paul Nauta.

“We’re not sure if it’s going to work,” said Jay Verkler, “but if you think about technologists and genealogists, they’re both compulsive problem solvers.”

The Expo includes components directed to this end in addition to the usual trade show fodder: booths, vendors, brochures, candy, and t-shirts.

There are Collaboration Stations. Couches. Large monitors. “You can think of it as a nerd station,” explained Verkler. Paul Nauta explained, “Here you can sit down, put your screen on the overhead monitor and share with a group an informal discussion.”

There is a schedule for Unconference Sessions. What is unconferencing? Verkler explained it like this: “First of all, someone comes up with a bright idea and writes it on a [schedule] board. Someone else comes along and sees it and says, ‘That’s a great idea'.’” All those interested get together and have their own conference session.

There is the Media Hub for members of the press (including yours truly). Glass rooms for interviews. Video equipment. Power. Internet.

And there is a Cyber Cafe for everyone. Computers. High speed internet. Network connections. Printer.

There is the Microsoft Playground. Video games. Foosball. Pool. Massage equipment. “Think of it as a mental palette cleanser,” said Verkler.

There is a demo stage. “Look at the schedule there,” said Verkler. “There are lots of great demos going on.” See my previous article, “RootsTech for Free,” for the schedule.

How will the RootsTech experiment turn out? In the Expo hall, I give the cafe, playground, and demo area thumbs up. I will be surprised if unconferencing and collaboration stations are successful. For now, thumbs down.

Want to form your own opinion? Stop by the Expo Hall if you’re in the Salt Lake area. It’s free and open to the public.