“Wildly successful. Loved every minute,” said Jay Verkler after the conclusion of the inaugural RootsTech Conference. Apparently attendees agreed; during the closing session audience members gave organizers a standing ovation. Verkler’s grand experiment to create synergy between genealogists, vendors, and technologists had been a big success.

“RootsTech 2011 was an amazing accomplishment,” wrote blogger Polly FitzGerald Kimmitt. “It's not about the technology, it's about how the technology draws us together.” 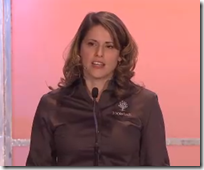 Roach said that inventing a new kind of conference and organizing it in a mere eight months had been a monumental challenge. Perhaps that is why she so willingly and constantly volunteered that she will not be chairing next year’s conference.

During Roach’s short, closing remarks she took some comic relief from funny suggestions gathered while naming the conference:

Roach has been quick to acknowledge the contributions of others:

I am so grateful for the opportunity to be a part of this great event. It will be an experience that I will never forget.

And finally, the success belongs to each and every one of you who chose to participate in RootsTech 2011.

In my final interview with her, she gave final thoughts about this year’s conference and next year’s:

Of this year: “Amazing. Completely amazing.”

For next year: “I really look forward to participating… as a participant.”