Richard G. Scott: Some of the Finest at RootsTech 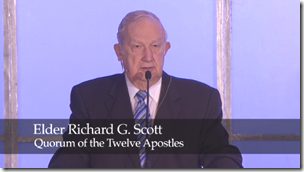 “We have some of the finest organizations on earth represented and handling various aspects of this conference,” said Elder Richard G. Scott at RootsTech. “We feel honored to be part of that.” Scott is a high ranking leader in the Church of Jesus Christ of Latter-day Saints.

While Verkler is the president and CEO of FamilySearch, his position at FamilySearch sponsor, the Church of Jesus Christ of Latter-day Saints, is managing director of the Family History Department.1

Presumably, Maynes reports to Scott, since Scott is the apostle that directs the Church’s Temple and Family History Executive Council.3 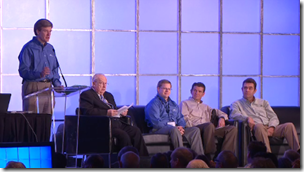 Scott spoke at a devotional for Church family history consultants held during RootsTech. Unfortunately, I was moderating another session at the same time and was unable to attend. Here are some things I’ve gleaned from others:

James Tanner captured the answers to these questions on his blog:

To see his answers, read “RootsTech—Devotional with Elder Richard G. Scott.” Thanks, James!