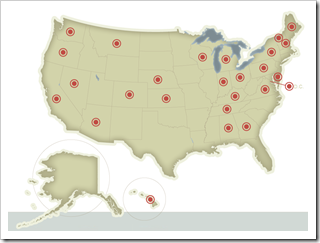 For Ancestry.com, Friday the 13th was a lucky day. With the release on that day of indexes for 15 additional states, Ancestry took the lead in the 1940 U.S. Census horse race.

“We are working hard here at Ancestry.com to bring the 1940 US Census to the public,” said Ancestry spokesperson, Matthew Deighton, “and are now very well ahead of schedule from our initial completion predictions.”

Ancestry has published indexes for 26 states, accounting for 2.1 million pages, or 55% of the entire census.

Since my last update, and as of 18 July 2012, the FamilySearch coalition released the District of Columbia (Washington, DC), Minnesota, and Rhode Island. This brings their state count to 32 and their page count to 1.3 million. That is 35%, 20 points behind Ancestry.

MyHeritage is still working on their second state, New York. According to calculations based on record count, they have published just 7% of the census.

FamilySearch indexers have indexed considerable amounts of states that aren’t yet 100%. That work is reflected in indexing totals but won’t be reflected in publication totals until the states are complete.

This raises the question as to whether or not Ancestry can retain its lead. Have they increased their indexing capacity? Or is this a temporary situation that the FamilySearch juggernaut will overwhelm?