Serendipity at the BYU Conference 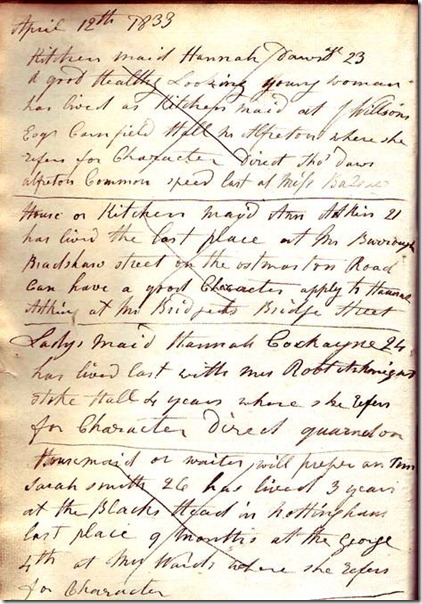 Sue VerHoef is an archivist for the Atlanta History Center in Atlanta, Georgia. Last week she had the pleasure of attending the BYU Conference on Family History and Genealogy.

John Titford, a Londoner by birth, works as a writer, broadcaster, researcher, and genealogical bookseller. And he was asked to be a keynote speaker at this year’s BYU conference. He also gave several lectures, one being “Who Was Mrs. Williamson? An 18th and 19th Century Genealogical Detective Story.”

Of all the classes offered during that time slot, Sue chose to attend John’s.

On the first slide of the presentation he showed the first page of a 200+ page manuscript book that he picked up at a used book faire. It dated from about 1830 to 1840 and contained about 8,000 entries of servants seeking employment in Derby, England.

As that first slide flashed by on the screen, Sue thought she might have seen the Bridgart name.

At the end of the lecture, Sue very excitedly jumped up and asked John if he would go back to the first slide. “I think I saw an ancestral surname of mine.”

He went back to the first page and there it was. The audience broke into applause.

That was not the end of it. John had transcribed the book and happened to have a copy on the laptop he chose to bring. After the lecture he went back and searched the transcription. There he found several other occurrences of the family name to share with Sue.

“I'm still grinning from ear to ear,” said Sue. “it's something I'll never forget, nor will I forget how gracious Mr. Titford was to spend time sharing his work with me.”

That is what we call “Serendipity in Genealogy.”