Rod DeGiulio: All About Records 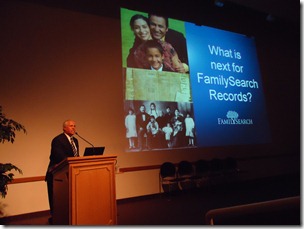 “It is an emotional thing for me,” said Rod DeGiulio, pausing for a moment. Rod DeGiulio is senior, executive vice president of records for FamilySearch International.

DeGiulio was sharing some of the exciting record acquisition projects underway at FamilySearch. One of them is an agreement with the Italian government to digitize all their civil registration records. The Italian project is near and dear to DeGiulio. Of Italian ancestry, he’s had a lifelong desire to research his Italian ancestors.

“I tried to put myself into a position where doors could be opened,” he said. One day he was approached by his superiors at Hewlett Packard corporation and asked if he might possibly accept a multi-year assignment in Italy.

That gave him the opportunity to travel to the small town where his ancestors lived. At their first meeting, the elderly parish priest would not allow him to see the records for trivialities such as family history. Over time, DeGiulio befriended the priest was eventually given access to the records. With excitement he opened records that had probably not been looked at for 50 or more years. Within minutes he had found his grandfather’s birth record.

“My heart was just turned in full,” said DeGiulio. In another hour or two he found his great grandfather. Eventually he was able to tie about 70% of the people in the area into his family.

DeGiulio put himself into position again when he took early retirement from Hewlett Packard. He was soon approached by FamilySearch to marry his knowledge of high capacity manufacturing with his love for genealogy. He has “responsibility for the acquisition, digitization, data treatments, and online publication of high value genealogical records from all over the world.”

It’s not a small task. It is estimated that of the 70 to 90 billion people who have ever lived, 10 billion of them have been documented and 60 billion records exist for them.

In India alone, today there are 1.2 billion people. The 2011 census occupies 36 linear miles of shelf space. By law it must be destroyed before the 2021 census. Records are perishing throughout the world.

In Venezuela, FamilySearch is engaged in a project to digitize Catholic Church records of birth, baptisms, and death from 1800 to 2011. FamilySearch is operating four cameras. The local diocese and seminary are providing some of the indexing volunteers.

Leaders in Sierra Leone heard of our Guatemala project and wrote to Thomas S. Monson, president of FamilySearch sponsor, the Church of Jesus Christ of Latter-day Saints, asking if they could do the same in their country. 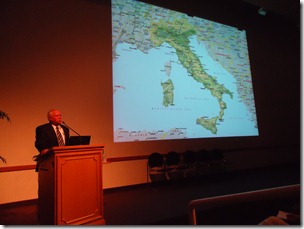 The Italian project is an agreement with the government to digitize and publish online all civil registration records for the entire nation. They estimate there will be over 130 million birth, marriage, and death records. Over 20 camera crews are now in Italy. The project will take over six years to complete. FamilySearch has created a special page about Italian records and research.

Since 1938 FamilySearch has captured 3.1 billion, most stored on 2.5 million rolls of microfilm from 202 different countries. Twenty-three percent of the images in the vault have been digitized. They will finish in 3 to 4 years.

They are adding 80 to 100 million per year using 210 camera crews in 48 different countries. One-third of them are senior missionaries. Many more are needed because FamilySearch wants to expand by several times in the next few years. No special skills are required and service opportunities are available locally and abroad. For more information, email TomlinsonKL@familysearch.org.

FamilySearch is attempting to shorten the time between record imaging and online publication. A year ago, it took seven months to process and publish the images. Today it takes between four and six weeks between click and publish.

FamilySearch originally guessed indexing the 1940 US Census would take from April to November. Now they are expecting to be done by the end of the month (August). Over 155,000 indexers have participated. In a recent indexing push, FamilySearch challenged indexers to break the old record of 3.3 million and index 5 million records in one day. Within the first three hours they hit the 5 million goal. By the end of the day, indexers had finished a whopping 10.5 million names.

Also, as the 1940 community project wraps up, FamilySearch hopes indexers will continue on with a new project: US Immigration and Naturalization records. See a progress dashboard for more information.

FamilySearch now has 60,000 books and periodicals in its online collection.

FamilySearch releases computer code every two weeks to make the website easier to use. Within the next several months, it is hoped that users will be able to add corrections to misindexed records.

DeGiulio made the remarks at the 2012 BYU Conference on Family History and Genealogy.