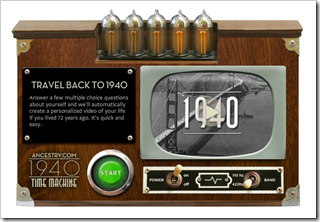 Just in time for the Labor Day weekend, Ancestry.com is offering its entire U.S. census collection for free through September 3rd. The 25 collections, consisting of  713 million records, are:

Additionally, Ancestry has created a time-machine of sorts. Answer a few multiple choice questions and Ancestry will create a personalized video of the life you would have led 72 years ago. Access the Ancestry.com 1940 Time Machine on their website.

Finally, Ancestry has provided a handy chart indicating what information was collected in each census year. Click on the thumbnail below for a full-sized image.