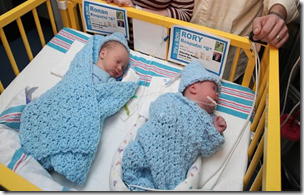 The next time you see a record of twins born a year apart, don’t be too dismissive. Ronan Rosputni was born in 2011. His twin brother, Rory, was born in 2012. To be more specific, Ronan was born at 11:37 PM on 31 December 2011 and Rory was born at 12:10 AM on 1 January 2012. Okay, okay. I admit to exaggerating a little bit. Being born in separate years doesn’t mean they were born a year apart. Still, we come across weird stuff in genealogy, and this is one of them.

That New Year’s Eve saw three sets of twins born in separate years. In addition to the Rosputnis in Buffalo, New York, there was Beckett and Freya Humenny in Minneapolis, Minnesota, and Blake and Jocelyn Bear in Tampa, Florida. I haven’t heard yet if there were any this year.