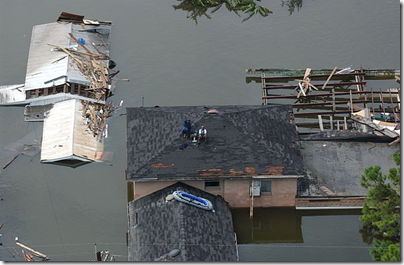 Hurricane Katrina was one of the five deadliest hurricanes in the history of the United States. “At least 1,833 people died in the hurricane and subsequent floods,” according to Wikipedia.1 “The most significant number of deaths occurred in New Orleans, Louisiana, which flooded as the levee system catastrophically failed, in many cases hours after the storm had moved inland.” The failure of the levee system is considered one of the worst civil engineering disasters in U.S. history. “Eventually 80% of the city and large tracts of neighboring parishes became flooded, and the floodwaters lingered for weeks.” This delayed the return of people to their homes and businesses.

“More than ten days after what will probably become the greatest natural disaster in the United States… archivists have NOT BEEN ALLOWED into their collections — not for a day, an afternoon, even an hour,” wrote Shelly Henley Kelly, then immediate past president of the Society of Southwest Archivists.2 Archivists were beginning to panic. In one attempt to access their collections, archivists were turned away by Federal troops.

Two-hundred and fifty years of birth, marriage, death, and other records dating back to 1769 were in storage in the second lower level of the New Orleans Public Library.3 The library was thought to be inundated, the basement flooded. When the hurricane hit, FamilySearch (Genealogical Society of Utah) camera operator, Charles Banz, had been in the middle of an extensive project to photograph these irreplaceable records. For almost three weeks he waited to see what had happened to them.

“He studied aerial photos of the building, talked to state archivists, and stayed glued to the television,” said one account. “All indications suggested utter destruction of…the records. Finally, he received word from New Orleans archivists that they had been allowed into the building, checked his project and found most of the library, including the second lower level, to be dry and sound. Building engineers said the waters rose to within about 2 inches of entering the library. Other archivists could hardly believe it. Some even called it a miracle.”

We call it “Serendipity in Genealogy.”