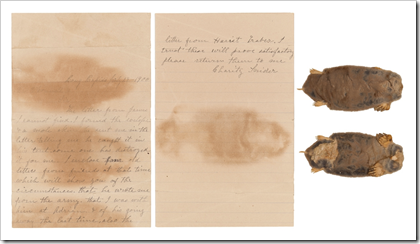 Kimberly A. Savage is the winner of my RootsTech 2014 Free Pass Context. This is my edited version of her contest entry. Yes, “Records Say the Darnedest Things.”

By Kimberly A. Savage

Have you every struggled with documenting a marriage record?  Consider Military Records for hard to find marriage evidence.

Finding marriage records for certain times in history can be difficult, but it might be done by thinking outside the box.  Here is an example of a strange way to prove a marriage: using a mole skin.

Charity Snider, who was born in 1837, found a creative way to prove she had been married to her late husband.  In 1900, living in Long Rapids, Alpena, Michigan, she began the application process for a Civil War widow’s pension.  One of the requirements for obtaining a widow’s pension was proof of marriage.  Having no official marriage record to her late husband, James J. Van Liew, a Union solider, she explored alternative ways to establish her relationship.

During the war James had caught a mole in his tent and had sent the skin to her. The original letter was addressed to “Dear Wife.” She searched for the long-lost letter. It must have been frustrating for her; she found the envelope but not the letter.

And she found the mole skin.

She sent the mole skin to the Pension Bureau with the following letter.

The letter from James I cannot find.  I found the envelope and a mole skin he sent me in the letter telling me he caught it in his tent.  some one has destroyed it for me.  I enclose four old letters from friends at that time which will show you of the circumstances.  that he wrote me from the army. that I was with him at Adrian. and of his going away the last time. also the letter from Harrit Taber.  I trust these will prove satisfactory please return them to me.

Charity received her pension. The mole remains in her application file.

Yes, “Records Are the Darnedest Things.”

Military records can be found online (at Ancestry.com, FamilySearch.org, Fold3.com, etc.), on microfilm, and at the National Archives. To learn more, visit Archives.gov.