Donny Osmond to Speak at RootsTech/FGS 2015 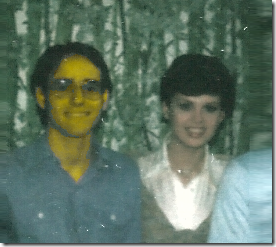 My best friend, Donny Osmond, will be a keynote speaker at the RootsTech and FGS 2015 conferences. Fine. I admit I wasn’t friends with Donny. It was Marie. She was my best friend. To prove my claim. I proffer the evidence to the right. This was taken 1 April 1978, the day Marie and Donny were interviewed by Barbara Walters. Really. I stood behind the camera.

Okay. Maybe she wasn’t my best friend. Would you believe she was a good friend? No? How about a once-in-a-lifetime date? Still no? Would you believe she was a classmate? Alright, alright. She is the first cousin of my youth group leader. I met her once. But it actually was the day she was interviewed by Barbara Walters. And I really did stand distantly behind the camera for one segment. That’s my story and I’m sticking with it.

To be clear, Marie is not speaking at RootsTech/FGS 2015. But I have to show a picture of Marie because, while I did meet Donny that day, he wasn’t the one I had the insatiable crush on. But I digress…

Donny will be speaking on—Valentines Day—Saturday morning, 14 February 2015. He’s been an entertainer for more than 50 years. The Donny and Marie Show was a regular staple in our house. I loved him in Joseph and the Amazing Technicolor Dreamcoat. (That casting was brilliant.)

It turns out he and his family are also genealogists. “I’m already looking forward to this exciting event,” Donny said. “Family and family stories are obviously very important to me. This is a chance to connect to something that is part of who I am.”

Donny’s genealogy includes two ancestors who served in the War of 1812. As part of their campaign to preserve the pension files from that war, the Federation of Genealogical Societies’ (FGS) have written about them. Donny’s 4th great grandfather, Elisha Cragun, served in the Battle of New Orleans and Samuel Beeler, served in the military in Ohio. (Visit the Preserve the Pensions website if you want to contribute money to the project.)

“Donny will kick off the final day of RootsTech 2015,” says FamilySearch, “taking the stage for what is expected to be the largest RootsTech audience ever.”