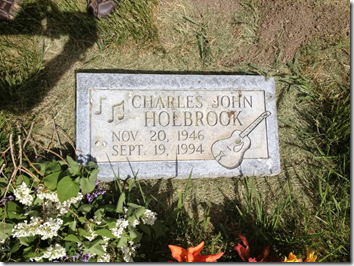 In honor of Memorial Day, here are two graveyard experiences.

We all regularly benefit from the work of those that have gone before. We use indexes, abstracts, transcriptions, and online trees (ideally well sourced) done by others. We accept help and direction from others. Rarely can we return the same value to them that we received. So we “pay it forward.” We offer our help and expertise to others. We post our well sourced online trees. We transcribe and abstract records. We participate in indexing projects. That’s just what genealogists do.

Randy Wilson tells me that a few years ago on Memorial Day he and his family were visiting the cemetery in Chesterfield, Idaho, as his wife has relatives buried there. Since five of them had smart phones (the Wilsons, not the dead relatives), they decided to use the BillionGraves app to photograph the entire cemetery. BillionGrave came along before Ancestry.com did an app for Find A Grave. BillionGraves does things a little differently than the old, traditional Find A Grave process. BillionGraves uses a streamlined process. All you do at the cemetery is take photographs. The app tracks the location of the graves using the GPS function of your smart phone and uploads the photos. After the photos have been uploaded, anyone can go to the Billiongraves website and transcribe them. In the case of the Wilson family and the Chesterfield cemetery, their on-a-whim family project ended after uploading the photos.

About a year later, Randy’s 14 year old son was using FamilySearch Family Tree. Family Tree had found a hint for one of his ancestors. He clicked it and found it was for a grave marker. When he clicked to view the photograph, he received a pleasant surprise.

“Hey! I took that picture! That’s my shadow!”

Randy said, “Because he was willing to do some service to benefit someone else, and because others were willing to do some, too (those who indexed the pictures we took), he happened to be one of the beneficiaries himself.”

Thank you, Randy, for sharing.

A few years ago, I was searching for my 3X great grandfather in a large municipal cemetery. The office had given me a map and told me where to look. I searched for a couple hours with no luck, when back to the office and was told the same thing. By now it was getting late in the day, but I decided to give it one last try and went back. As I was going up and down the rows, an elderly gentleman who had been mowing all afternoon approached me and asked if he could help. I told him who I was looking for (first name John). He immediately replied "Capt. Jack is not in here; come with me". He took me straight to the marker I was seeking in a completely different area. Capt. Jack had been a Union officer in the Civil War and this was a cemetery in the south where he relocated after the war. The gentleman who helped me happened to be African American.