Serendipity in Graveyards and Digital Scans 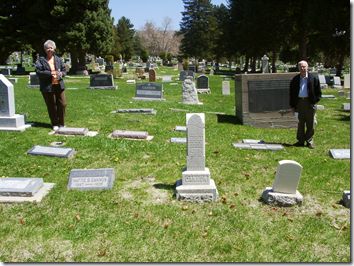 Several of you have shared serendipity stories in response to Margaret McCleskey’s cemetery story. Since not all my readers see the comments, I thought I would repeat some here. The first is from an anonymous poster:

I've had a couple of these cemetery experiences. The first was 20 years ago looking for the graves of my aunt and uncle. I was driving a convertible with the top down and was leaving the cemetery because I was unsuccessful at finding them. It started raining so I got out to put the top up, happened to look at the grave stones on the ground next to me when I was getting back in, and there they were. I was shocked!

The second time was two years ago in South Dakota. I found my grandparents graves the day before, but was unsuccessful at finding my great grandparents, who I knew were buried there also. I discovered when I stopped at a gas station to fill up with gas the next morning that I had apparently lost my wallet. I went back to the cemetery to see if I could find it, and found both sets of great grandparents and a lot of great aunts and uncles I didn't remember also being there. This with the assistance of cemetery workers who hadn't been available the day before, but just happened to arrive while I was there. I also found my wallet in the back seat of my car, where I had slept during the night since I was short of funds. I believe I was called back.

Another is from Joan (Myers) Young.

While going through Hampton Reformed Cemetery in Hampton, Adams County, PA, I was looking for the graves of my 2nd grandparents who I already knew were buried there. The surname is MYERS and those familiar with this area will understand that about half of the surnames in that cemetery are MYERS. I searched and searched and could not find them. I told my husband we might as well leave for our long drive home because it was getting late and would be getting dark soon. On my way out of the cemetery a bird flew right into my face. It was a Killdeer defending its nest. The bird forced me back to get away from its attack...and I ended up staring directly into the inscription on my grandparents' stone, with the names as plain as could be. Had it not been for that Killdeer I'd never have found them. Somehow I feel they wanted to be found and reached out to me in the only way they knew how...through that bird.

Serendipity is amazing. I was helping a distant relative who wanted to find a marriage record in a New Jersey town's records. My local family history center had the film in its library, so I volunteered to find it for him. When I looked at the film every page was ripped, blotched and stained and the film images were so dark the words were almost illegible. I dutifully made digital scans of every page anyway. I randomly picked a page to attach to my e-mail to illustrate how hard it would be to find anything in them. To my absolute amazement, in the middle of my screen appeared the very marriage record he was looking for.