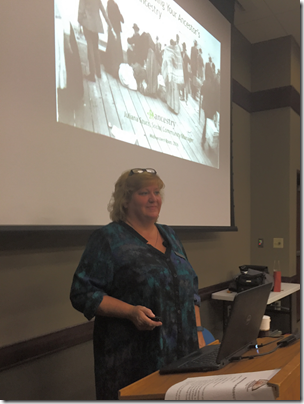 Juliana Szucs, social community manager at Ancestry.com presented “Coming to America: Finding Your Ancestor’s Arrival Record on Ancestry” at the recent 2016 conference of the Federation of Genealogical Societies.

Juliana remembers when you couldn’t get immigration records online. You had to wade through lots of microfilm. People weren’t very excited about using them. As I recall, the films were organized by arrival date, so if you didn’t know the date, you had to scroll through every name on every page on every ship on every day of every year until you found your guy—or started looking at another port. Having just an approximate date saved days of work.

Look for stories when researching migrations. Juliana had found the arrival record of her ancestors, William and Mary Ann Huggins, in New York in 1844. But they were missing their three children. It wasn’t uncommon for some family members to come before others. It’s called chain migration. Juliana finally found the record of the three coming in 1849 on the Liverpool.

Put your ancestor’s trip in the context of history. In 1849, it took one or two months to cross the ocean. Most of the Liverpool’s journey had been in January and February. This was in the middle of the potato famine. If starvation was driving the Liverpool’s passengers from Ireland, many may have been ill prepared for the journey.

Juliana said there were three eras of passenger lists. The 1820-1890 era followed the Steerage Act of 1819. Very little information was listed about passengers: name, age, gender, occupation, and nationality. In 1891 responsibility for passenger lists was transferred to the Office of Immigration which instituted standardized forms that collected much more information.

When searching for immigrants on Ancestry.com, there are some things to keep in mind: