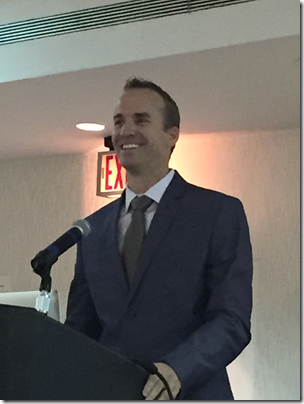 Saturday morning at the 2016 conference of the Federation of Genealogical Societies I was honored to attend the Ancestry.com  breakfast presented by Ancestry.com. The speaker was Quinton Atkinson, senior director of content acquisition and partner development at Ancestry. Quinton’s topic was “From Content to Discovery on Ancestry.” Quinton began by acknowledging Lou Szucs. Ancestry’s content would not be what it is without Lou, he said. He was able to work with many archives because the archivists knew Lou. Honoring that trust was always in his mind.

Ancestry recently moved to their new building in Lehi, Utah. Worldwide, they have grown to 1,400 employees. They have tripled their revenues in the last six years. (That was about the time I left. I feel bad now for holding them back.) They had $225 million in revenues in 2009 and $680 in 2015. Last year they received another round of money, a $2.6 billion investment. They have 2.4 million paying customers to core Ancestry sites. They have over 2 million genotyped customers. They have 18 billion digitized records from 80 countries. They have 8 billion profiles in 80 million user trees. (I think those 8 billion are counted in the 18 billion records.) Users have contributed 300 million sharable photos, documents, and stories. All of this totals to over 10 petabytes of data.

Quinton related his fascination with the Olympics. He watches sports he doesn’t normally watch. “Why am I enthralled with ping pong?” he’s asked himself. As he’s thought about it, he realized it was because the network has done such a good job framing their stories, their backgrounds, their struggles, and what has brought them to the Olympics. Because of their stories he feels connected and roots for them. (I only just now caught the double meaning of “roots.”)

How has Ancestry managed to get so many records? They begin by trying to understand the motivations of the archive. For the Library and Archives Canada, it’s access and preservation; for The National Archives of the United Kingdom, it is access and financial terms; for the National Archives of Australia, it is exposure and web traffic. Ancestry tries to be flexible, balancing the archive’s needs, the customers’ desires to have index and images in one place, and Ancestry’s financial goals.

Quinton told us a story that describes their situation in regards to the project to preserve the pension files from the War of 1812. A young boy was in a tie nearing the end of a wrestling match. His opponent had him in a hold and he found himself unable to get out. In this dire circumstance he noticed out of the corner of one eye his father in the stands, vigorously urging him on. What could he do? Then he noticed out of the corner of his other eye a big toe. His father, watching, saw his son suddenly escape the grip and quickly pin his opponent. After the match his father asked him, “How did you do it?” His son replied, “It is amazing what you can do when you bite your own toe.”

Quinton told us that for the past year they have faced challenge after challenge at the National Archives and Records Administration digitizing the pension files. But with the completion of the fundraising, it is a bit like biting your own toe. They are going to go back rejuvenated to get it done.

In the future, Ancestry will have to scrutinize record acquisition more carefully because they have already acquired most of the “low hanging fruit.” (That refers to the records that can be acquired and published that have lots of information for an inexpensive price.) In the future they will capture more fields to tell the narrative of the story. “There’s a lot more stories to be told,” he said. They’ve added more fields because more fields means a better story and a better story means more connections. And they will increase the use of automation in the extraction (indexing, as FamilySearch calls it) of information. There is another balance that must be struck, and that is the number of records that can be published versus the number of fields that are done.

In closing, Quinton showed the Momondo DNA video that I’ve highlighted before. (See “DNA Versus Extremism.”) He said that considering the conflicts we’re having in the world, this [video] drives home the importance of what we’re doing. “We love what we do.”