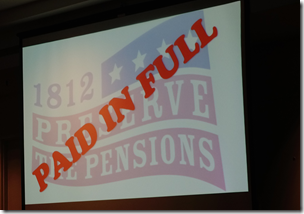 In a stunning announcement at the opening session of the 2016 conference of the Federation of Genealogical Societies (FGS), Curt Witcher announced that the fund raising goal of the Preserve the Pensions campaign has been met! The FGS project to raise $3.7 million dollars has been going on since 2010. The War of 1812 pension files are among the most frequently requested materials at the National Archives and Records Administration (NARA) and have never been microfilmed or digitized. Since handling the files damages them, they needed to be digitized to prevent further damage.

An anonymous donor made a contribution of $500,000, which Ancestry.com matched. FGS also acknowledged the individual conference attendees who included a donation along with their conference payment. All told, over 4,000 individuals and 115 genealogical and lineage societies contributed money to the effort. Ancestry matched each donation.

“We are humbled and grateful for the generosity of the genealogical community and those outside of our community who are dedicated to the preservation of records. Thank you!” said D. Joshua Taylor, FGS President. “This historic gift, in-tandem with the thousands of contributions from individual genealogists and societies, illustrates the incredible power of the genealogical community; together we can make a difference.”

With ongoing cooperation from the project’s partners and major supporters, NARA, Ancestry, Fold3, and FamilySearch, these important documents will be made available free, forever to the general public.

“It’s gratifying to see the fundraising portion of this project completed after five years, and now we look forward to ensuring these important records are preserved,” said Ancestry President and CEO, Tim Sullivan. “This is a fantastic moment for FGS, the genealogical community, and future generations who will benefit from the perseveration of these rich pension records.”

Several minutes earlier, FGS had announced some awards given in recognition of service to the Preserve the Pensions project. Both are good friends of mine.

Judy Russell from New Jersey, also known as “The Legal Genealogist,” was presented with the Directors Award for her role as a leader within the genealogical community in helping to raise awareness and funds for the Preserve the Pensions project. I’ve been in more than one luncheon or class where Judy passed around the plate and raised amazing amounts of money. She sponsored money raising events on her blog. She’s amazing.

Mike Hall from FamilySearch in Utah was presented with a Presidential Citation for his constant dedication and support of FGS’s Preserve the Pensions project. Mike hand crafted several limited edition figurines depicting soldiers and sailors of the War of 1812 and made them available to donors of $100 or more. Mike also earned donations by gathering pledges for his 1812 mile personal triathlon. Mike was not able to be present to accept the award. He recently donated a kidney to the wife of FamilySearch’s David Rencher. It was Judy who relayed his request for donations to Preserve the Pensions in place of flowers. (See “Today, in the West…” on Judy’s blog, The Legal Genealogist.)