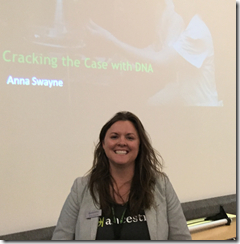 Anna Swayne, a ten-year veteran of AncestryDNA presented “Cracking the Case with DNA” at the 2016 conference of the Federation of Genealogical Societies.

Most attendees had attended her introductory morning session, but she did a short review of DNA basics for those who hadn’t. For that review, I invite you to see my article “”

“How do I use DNA to solve my research questions?” Anna asked. She illustrated with several scenarios. One was the hard-core kind of example I like. Her friend Nancy (name changed) had figured out all her great-grandparents except for her paternal-line great-grandfather. And all she knew about his spouse was a given name: Rachel.

Nancy went about finding and testing descendants of the known great-grandparents. She pursued traditional research techniques for her paternal grandparents, David Walker and Ellie Roth. She learned that family lore stated that David was named after his father.

And then she waited. (This is why it is important to convince everyone you know to be tested.)

A couple of months later Nancy got a 3rd cousin match with a man named Brent (name changed). His location was promising. The presumed common ancestor would be Thomas Morgan. On the census, one of Thomas’s children was named David.

“There were no fireworks,” Anna said, noting that so far Nancy doesn’t have enough evidence to make a conclusion. But now she has a candidate and a direction to go.

To see AncestryDNA’s brochure from the FGS conference bag, click here and here. 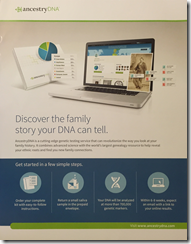 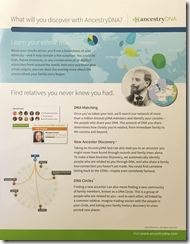