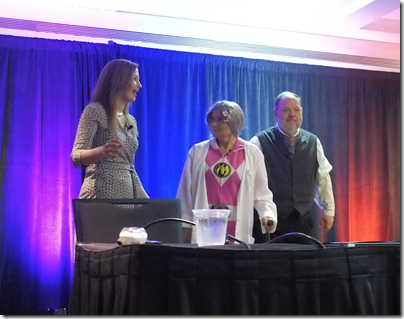 J. Mark Lowe, Mary M. Tedesco, and CeCe Moore presented the opening keynote at the 2016 Conference of the Federation of Genealogical Societies in Springfield, Illinois. They spoke to the theme “Genealogy: Past, Present, and Future.”

Mark represented the past. He is a full-time professional researcher and educator, and a former APG president and FGS officer.

He took us back 120 years to 1 September 1896 in the persona of Robert Wilson Patterson, Jr., business manager of the Chicago Tribune. “Robert” regaled us with genealogy-related stories taken from his newspaper. The Mexican government pays a pension to hundreds of the descendants of Montezuma II. (“Too bad we jus’ can’t test their blood to see if they qualify.”) The Marquis of Alba had a fake pedigree. (“You can’t believe in everything you hear. You can only believe what you read in the Tribune.”)

She came onstage as her 1999 self. It was 31 December 1999 at 11:57pm. She started to login to Americano Online. Her modem started shrieking as modems of the 1990s did. Then Y2K struck. Mary’s email went berserk. Suddenly she had messages from 2016. Reading them she learned a lot about our present. A February message from the DAR stated that they now accept Y-DNA evidence alongside other documentation. A March message from GenGuru Genealogy & Technology talked about smart phone and iPad genealogy apps. It mentioned doing genealogy with social media, crowdsourcing, Facebook, Twitter, Instagram, etc. An April message from Juliana Szucs mentioned tens of billions of genealogical records online. “Wait,” she said. “You can’t be serious?” An April message complimented her on doing a great job co-hosting Genealogy Roadshow. “Genealogy is a TV show genre?” Mary exclaimed.

CeCe Moore represented the future. She is the DNA consultant for Finding Your Roots and Genealogy Roadshow, both on PBS. She is the founder of TheDNADetectives and co-founder of the Institute for Genetic Genealogy.

CeCe came onstage dressed like Doc Brown exiting a DeLorean. She asked an audience member if she could sample his DNA and promptly bounced a laser off him. (Maybe it was a woman; I couldn’t see from my seat.) CeCe took her computer out of her pocket and started giving it voice commands. In a matter of moments, the computer had sequenced the DNA, found several of his ancestral towns, and reconstructed the DNA of his 4th great grandmother. Using the DNA, it reconstructed the woman’s physical appearance. The computer analyzed the woman’s genetic memory, allowing CeCe to ask the woman questions like “What is your maiden name?” and “How did you feel when you came to America?” CeCe announced she had to run. “I’ve got an adoptee I need to work with and it’s going to take five or ten minutes to fill in their whole tree.”