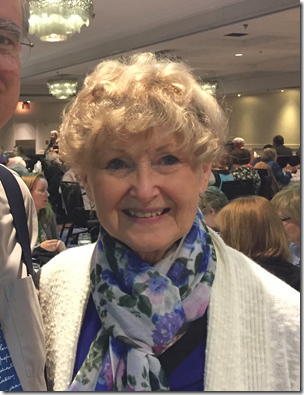 Me (left) and Lou (center) at the FGS Gala

Just a few days ago I mentioned that the Federation of Genealogical Societies (FGS) was founded in Juliana Szuc’s mother’s dining room back in Illinois in 1975. Actually, I’m not certain if the dining room meeting was December 1975 or January 1976. In any event, the State of Illinois issued the FGS charter in January, so this year is FGS’s 40th! Congratulation, FGS! But I digress…

When I walked into the opening session of the FGS 2016 conference, I was delighted to see that Juliana ‘s mother—Lou Szucs—was in attendance. I knew her and worked with her for years at Ancestry.com. She is the nicest lady. She hopped up and gave me a big hug. Just minutes later, still in the glow of that wonderful hug, Paula Stuart-Warren announced the winner of the Rabbi Malcolm H. Stern Humanitarian Award. She explained that

A plaque [is] presented to recognize the lifetime contributions of a rare individual whose positive personal influence and example have fostered unity in the genealogical community, provided leadership to its individual members, and helped make family history a vital force in the community at large.

Lou is this year’s winner of the Rabbi Malcolm H. Stern Humanitarian Award.

A founding leader of FGS, Lou has represented FGS for nearly every year of its 40 year history. Her work for Ancestry.com, for many years, worked to foster collaboration and growth amongst the genealogical community. Her humanitarian efforts towards genealogy and family history have forever impacted the field and will continue to be seen for generations to come.

We gave her a standing ovation.

But the best was yet to come.

They then announced the creation of a new award category:

The Lou D. Szucs Service Award will be presented to recognize the contributions of an individual whose positive, personal influence and extraordinary service to FGS and the genealogy industry have gone above and beyond the norm, impacting the overall benefit to the genealogical community at-large and spreading the awareness of family history to the general public.

FGS President D. Joshua Taylor said, “Lou was one of the first leaders I met as a young genealogist. Her commitment to FGS and the genealogical community is truly awe-inspiring. The creation of this award is a true testament to her lasting legacy in the field of genealogy.”

Congratulations, Lou. It couldn’t have happened to a more deserving person.