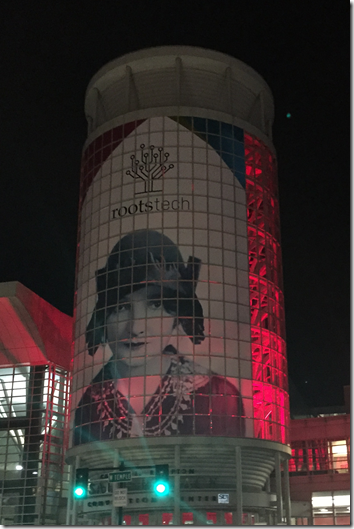 FamilySearch president and CEO, Steve Rockwood, introduced us to Nkoyo Iyamba. RootsTech has engaged her to host keynote sessions. FamilySearch’s Shipley Munson has done it in the past and told us no one is happier than he that they’ve hired a professional. Nkoyo is an Emmy award winning broadcast journalist. And she used to sing with Shipley in the Mormon Tabernacle Choir. Nkoyo will be joined by Jason Hewlett, an entertainer and really funny guy.

Shipley Munson shared some numbers illustrating how large RootsTech is this year.  This will be the largest RootsTech, ever. Earlier today registrations for Saturday’s Family Discovery Day hit capacity; they capped them at 30,000. They had to close registrations for Innovators Summit at 1,400. They expect 12,000 core RootsTech attendees, Thursday through Saturday. Attendees represent 43 countries. (Wow! I don’t think I could even name 43 countries.) Each year there is always one, and only one, state not represented. This year it is Nebraska.

Jen Allen addressed us. She is this year’s show manager. She walked us through the keynotes, events, and all things RootsTech. She has done an impressive, impressive, job. Thank you, Jen. Jen shared with us photos of this year’s main stage. It comes in three parts, a main stage, a living room off to one side and a kitchen off to the other.

Jen told us that RootsTech is going to supply some fun Snapchat something-or-others. (Sure. I know what a Snapchat is. Who wouldn’t want a something-or-other to use with their Snaps. Maybe she said template. Is there a something called a Snapchat template? Does it make your voice sound like a bee and your face look like a dog? ‘Cause I’m not too fond of the idea of everyone at RootsTech drooling and talking in high, squeaky voices.)

One of Jen’s slides indicated yet another way to win stuff. Follow @RootsTechConf on Twitter. Tweet with hashtag #RootsTech a selfie of yourself at or watching RootsTech. Winners will be selected randomly throughout the day. 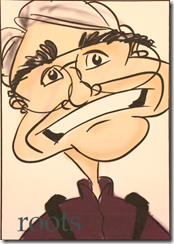 RootsTech brought in a couple of caricature artists for the media dinner. Kurt Francom sketched a picture of me. He was supposed to caricaturize me; instead, he did super-realism. Rats. It looks so much like a photograph, you can’t tell the difference. Well, I suppose it is about time to show you what I really look like.