Want to Be on Relative Race? 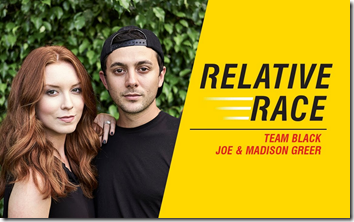 A producer for Relative Race has contacted me asking for help in finding four couples to star in season 3. Relative Race is the show where the couples race around America (it’s no longer across America) for ten days, completing challenges, and navigating to homes of undiscovered relatives. I watched season 1 and it’s quite compelling. Season 2 debuts 5 March 2017 on BYUtv. And you can be on season 3 and win $50,000! But there may be an even better reward.

They would particularly love to be able to reunite someone with a lost parent or sibling, or to fill in a gap in a family tree. That would be compelling television. Knock on a door. It opens and…

Another change from season 1 is that the two people in a couple can be spouses, siblings, or parent and child. You must be between the ages of 21 and 55. You must be willing to submit a DNA sample and a family tree. You must be available for filming for two weeks in August or September.

The deadline for applications is 28 February 2017. To apply, go to TRRcasting.com.