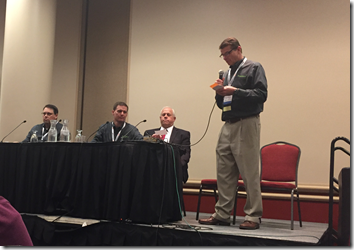 FamilySearch executives held a town hall meeting during RootsTech 2017 and answered questions for an hour. Today I will write about the questions and answers pertaining to records, online or on microfilm, and partners.

No one was representing the member and public outreach (marketing) division. They were busy doing some incidental project called RootsTech. Perhaps you’ve heard of it.

I’m sure some of these people are senior vice presidents—maybe all of them—but the conference app didn’t list them or their titles.

I need to warn you that I was typing like a madman trying to take notes of what was asked and said. I didn’t do a very good job. Consequently, what you’ll read below may or may not bear any resemblance to what was actually said.

Q: Is there any way to suggest acquisitions, such as a small community in Germany?

A: There is a dedicated team that develops that strategy. Today, we don’t have the capacity to do lots of small archives, but we are experimenting with ways to do so. We have a Record Capture Kit, for example, that could be loaned to a local society.

Q: Paul Nauta of FamilySearch in early 2017 wrote that over 30% of the 2.4 million rolls of microfilms in the vault have been digitized and published. That seems low. Is he right?

A: About 50% of the vault has been digitized. We don’t ever say when we will be done, but we are making really good progress. We go in priority order, with vital records and civil registration and census being digitized first, pretty much from around the world. Those are primarily done.

A: The reason for that is rights. In some cases, in some countries, we do not have the full rights to put all that content online. We can preserve it, sometimes we can even loan it on microfilm. We are working on the digital rights. That is something that Rod’s team is constantly working on, to improve our rights, and we are having lots of successes. We see laws change. We just had a huge opening in France; those laws are changing and we are starting to digitize. That’s on ongoing process. Over the next couple of years we are trying to wrap up digitization.

It isn’t going to take decades to finish digitizing the vault. We’re down to just a few years left until it will be done.

One of the drivers is just the incredible cost of microfilm. It just keeps going up and up and up. So even if we were in love with microfilm—and we’re not—price is pushing us to get this done much faster.

[This is TAI speaking, here: My understanding is that the manufacture of microfilm could cease almost without warning at any time. That could be really bad.]

Q: When will the microfilm of the membership records of The Church of Jesus Christ of Latter-day Saints be completed?

A: We actually already digitized and indexed it. That was been done as a closed indexing project several years ago. But it has not been released. We are working with the Church History Department who actually owns those records to see how we can get them available to you.

Q: [I couldn’t hear the question, something about removing films from the Family History Library?]

A: Only the films with your ancestors will be removed. We have a very complex algorithm that knows which films you need. Those are the films we remove. (Laughter)

As films become digital, we decide whether to leave them in the library or not. The films that need to be in the library because of rights, they will remain. It will keep changing.

Q: Some record sets that were once visible online are no longer visible once they were indexed. How come?

A: The only reason we would ever do that is rights. It’s that simple. It’s rare, but it happens. A law could change. We’re constantly working with our legal staff around the world. Data privacy laws change. That’s become more restrictive around the world, data privacy. And we do everything we possibly can to not turn those records off. But if we do, that would be the only reason.

Q. Why is it that Ancestry has a lot of those images that FamilySearch doesn’t? Why would other websites have records that we don’t?

I’ll tell you, privacy laws are one of the most difficult things we have to work with. Every country is different, even in the United States every state is different. And it changes constantly. And so there will be collections that come and go. Fortunately, there are lot more that are coming available than those that are being taken away.

Be aware of some of the legislation on the issues that come up. It does work when we [discuss] and work with our congressmen and senators. But be aware that that is something you can help us with. Coalitions of genealogists have really helped. France is a great example of that, opening up access that was once much more restrictive.

Q: What are your plans for future partners?

A: We are always on the lookout for more partners. We are also looking for partners outside the traditional genealogy space to create a richer experience for you. And we’re eager to find partners in other countries. Geneanet is a new partner in France. We have the largest collection of Chinese genealogies outside china, so we are looking into a partner in China. If you are aware of partners, contact me.

[Yup. They are definitely channeling Higgins and Fallon.]

Q: Any chance of a newspaper acquisition or collaboration?

A: We are working with some great newspaper companies and the obituaries you are now using on FamilySearch.org are due to a partnership with NewsBank. We want to bring more and more of that newspaper content. It is in the works.

Q: Have you contacted national libraries that call out those historical newspapers, many of which are public domain?

A: Yes. We are working to expand our newspaper holdings. Until two years ago we were doing nothing in the newspaper space, so this is a new area for us. We just did 26 million obituaries where the computer did the entire thing. OCR has been around a long time, but now we are using technology to understand the text. And we really want libraries outside of this country. Absolutely.

Q: As new partners are added to FamilySearch.org, how do you suggest we learn to use the partner’s technology?

A: Traditionally we have not done a lot to help use our partners products. We generally send you to the partner to learn. We are working on playing a bigger role, but the first thing will always be to go learn at the partner website. But where our two products interact, we are working on how to do that.

Tune in next time for more questions and answers.