Nearly ten years ago FamilySearch began an audacious project to construct a single pedigree to be shared by the entire world. After many false starts and stops, that process has now resulted in FamilySearch Family Tree, an experiment destined to make history, for better or worse. 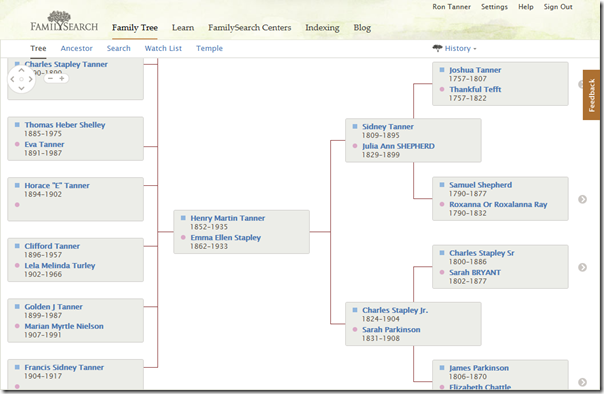 In September 2005 I sat in the opening session of the Federation of Genealogical Societies Conference in Salt Lake City, Utah. I don’t remember what else Jay Verkler said, but I remember the demonstration he and Craig Miller made of Common Pedigree, a product that came to be known as “new FamilySearch.” It was electrifying. Verkler and Miller, on different computers, simultaneously edited a common pedigree file, each building on the work of the other in real time. This file was to be a single view of all mankind, shared and improved by all. Collaboration would prevent duplication and improve data quality.

Attendees were told that the program would soon be available to the general public. One blogger was told that it would be the following year. (See “FGS Conference Keynote Address – Jay Verkler.”)

It wasn’t for twenty months, in May 2007, that the rollout began to members of the Church of Jesus Christ of Latter-day Saints. It was to be released to the public once it had been released to Church members in all areas across the world. The rollout proceeded slow but steady until the end of 2008. It was then that a fatal flaw was discovered in the product. One hallmark of the product had become its undoing: no one could delete anyone else’s contributions.

If an individual was added multiple times by multiple people, the duplicate individuals could be tied together (“combined”), but not eliminated. Imagine George Washington crossing the Delaware. Now image five hundred clones of George, all tied together, trying to share the same boat. FamilySearch servers were sinking like overcrowded rowboats.

The rollout was suspended in mid-November. FamilySearch addressed the flaw in two ways: it built bigger boats and it imposed a strict limit on the number of passengers allowed in each.

While the rollout resumed in mid-April 2009, plans were already under way for a new system to replace New FamilySearch. In July of that year Ron Tanner, New FamilySearch product manager, disclosed that work was underway on a new system code named SCOE (Source Centric, Open Edit). This project would become Family Tree.

Rollout of New FamilySearch to Church members completed near the end of 2009.

In early 2010 Tanner said, “We have a goal of getting the general public in by the end of the year.” (However, he did give his oft-repeated disclaimer that he was a product manager and he wasn’t making any promises. :-)

The end of the year came and went, but shortly thereafter, in February 2011, FamilySearch began beta testing public access to New FamilySearch.

At RootsTech in 2012 Tanner showed Family Tree and said that they were taking NFS data and moving it over to Family Tree and opening it up to everyone, including the general public by the end of the year.

The end of the year came and went.

Yesterday, someone noticed that anyone could get to Family Tree. There was no formal announcement from FamilySearch. I’ve seen this before. It is called a soft launch. It allows an organization to float a new product without being flooded with so many users that the system collapses.

And so it has come. Eight years after the general public got its first taste, FamilySearch has delivered its common pedigree.

“Our goal in the Family Tree is to document the genealogy of mankind, accurately,” said Ron Tanner, “and preserve it for generations to come.”