From RootsTech: When I Tell Their Stories, I’m With My Ancestors Again 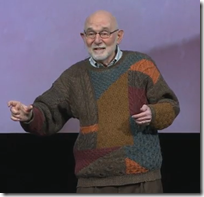 The 2013 RootsTech Conference opened this (Thursday) morning with keynotes by Dennis Brimhall, Syd Lieberman, and Josh Taylor. It looks like each day’s keynotes feature a RootsTech presenter and a Story@Home presenter. Lieberman was Thursday’s Story@Home presenter. Syd is a nationally acclaimed story teller, author, and teacher. He was awesome. When the videos are posted. He is a must see.

Syd said at the conference last year he was a little uppity, a story teller among genealogists. “What did genealogists have to offer me”?” Then he met Mike Hall of FamilySearch.

Syd’s grandparents were Jews living in Russian controlled Lithuania. Conscripted into a 25 year term in the Russian army, with Syd’s grandmother pregnant, they fled to America. Syd’s father was born as they crossed the Atlantic. “I didn’t know if I was American or not,” he used to say. He claimed he was born on the 4th of July. What could be more American than that?

Mike Hall pulled up information from FamilySearch.org about this family. Upon their arrival in America, they claimed the United States as their birthplace and English as their native language. In successive censuses, Mike and Syd witnessed a change. Eventually Syd’s family acknowledged their true nativity and true native language. The facts reinforced and helped tell the story.

“It’s a wonderful way to remember your ancestors,” Syd said of stories. “When I tell their stories, I am with them again.”

“Why are we here?” Syd asked conference attendees. “Because we love our family stories…We’re here to record our stories… We’re here to rejoice in this improbable and wonderful thing called life.”