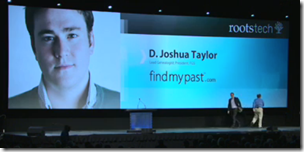 The 2013 RootsTech Conference opened this (Thursday) morning with keynotes by Dennis Brimhall, Syd Lieberman, and Josh Taylor. There seemed to be a common theme among all three: stories.

“I have grown up in this community,” said Josh Taylor, “so I thought I would start by telling a story.” Taylor is Business Development Manager—North America for Brightsolid, owner of FindMyPast.com, FindMyPast.co.uk, and other websites. (I’ve listed them in a previous article. )

Taylor began by telling us his own story, “the story of me.”

His Aunt Carol was one of the first genealogists he encountered. She loved to tend Josh. All she had to do was drop him off at the Carbon County Courthouse and he would entertain himself for hours.

“What I’m really good at is libraries and archives and books,” he said. “Don’t ever get me on a football field. It’s slightly awkward.” In school when they asked what you wanted to be when you grew up, he always said, “I want to be a genealogist!” People would look at him like he was crazy.

“The first genealogical mistake I made was not with a record,” he said. He discovered that his grandmother was born a year before her parents were married. He was about 11 or 12. “I did not understand the complexities of what I was about to reveal to my grandmother,” he said.

“Grandmother! Guess what I discovered!” 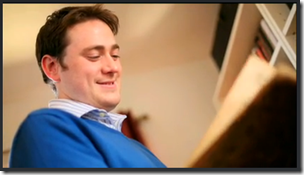 “I do believe in telling the stories about our families,” he said, “because if we don’t, all we’ve done is fill out a pedigree and a family group record and left it somewhere on a shelf hoping that one of our children or grandchildren will make a discovery.”

There are amazing technologies that the genealogy community is not yet using. “We must make learning about family history a visual and interactive experience. We need to make genealogical adventures accessible to the rising generation.”

“We need to bring gaming into family history now,” he said. (Private message to Josh: Is this a pre-announcement of a brightsolid product!?) We need to make genealogical engagement fun.

“If we tell the stories that are so important to our families we have absolutely endless possibilities as a community.”