From RootsTech: It’s More than Names—It’s Their Stories

The 2013 RootsTech Conference opened this morning with keynotes by Dennis Brimhall, Syd Lieberman, and Josh Taylor.

“We need to get a lot more people engaged in genealogy,” said Dennis Brimhall, CEO and president of FamilySearch. There are some things we need need to do. “Technology is an enabling tool. What we really want is to turn hearts to our ancestors,” said Dennis. “Technology plus stories and photos equals family history for everyone.”

Dennis was indexing immigration records recently when he came across the record of a small boy. Under the country of origin was a single word, “stowaway.” Dennis said that there was a story there. There might be descendants of that young boy sitting in the room today. Wouldn’t they like to know that story?

A year ago Dennis was the brand new leader of FamilySearch just trying to learn the role. Now, a year later, he can confidently spell genealogy. He thought as a new leader that he would spend a lot of his time thinking about the past, acquiring records, and such. But he’s found he’s spending most of his time thinking about the future. What will we be doing 20, 50, 100 years from now? Will our great-grandchildren look back at us in the same way that we look back at our great-grandparents?

“What will our great-grandchildren wish we had done?” he asked. “Will they be happy, joyful, or frustrated?” They will wish we had recorded the richness, the fabric of our lives. They’ll want much more than names, dates, and places.

Dennis related a compelling story of his father’s experiences in the Army Air Corp during World Ward II. His plane was shot down over Germany. Only two of the crew survived. Dennis’s father didn’t talk about his experiences much, but one of Dennis’s daughters felt compelled to learn and tell the story. In the forward to the resulting book she wrote, “I feel it is my duty and honor to make sure his life experiences have been captured and preserved for his posterity to read. I want his grandchildren to know this man, so they can discover and come to realize their honorable heritage.” 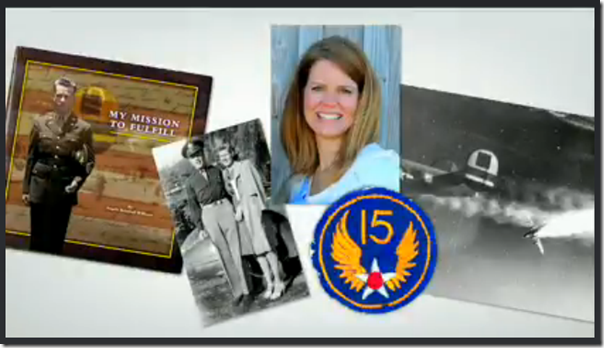 Photographs behind him illustrated Dennis’s story. Then he told us that the plane being shot down in one photograph was THE plane; his father’s plane. His family had the photographs through a remarkable coincidence. One day at the grocery store, his father noticed a man wearing the patch for his unit. He approached the man and found they were both on that ill fated mission. This man’s assignment was to document the mission via photography. He had taken photographs of the plane going down. He figured no one had survived. Both men lived in the same town and shopped in the same grocery store. Through this serendipitous meeting, Dennis’s father obtained precious photographs of his plane going down in flames over southern Germany. They are a treasure to his family.