I stayed at a motel for the first two nights of RootsTech. The morning of the Ancestry.com luncheon on the topic of DNA, I saw a pattern in the carpet that hadn’t been there before: 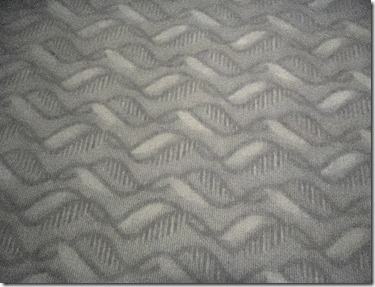 AncestryDNA divides the world into 20 regions such as British Isles, Central European, West African, and so forth: 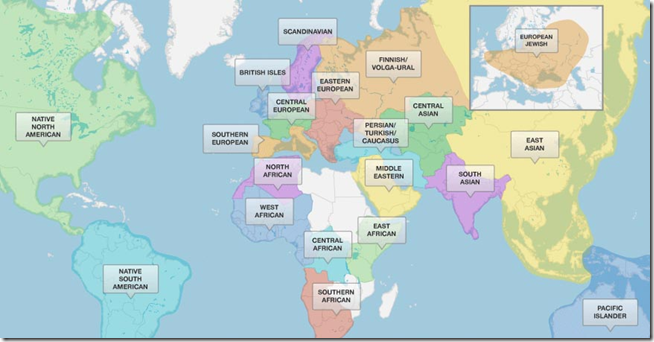 When AncestryDNA tests your DNA, they attempt to measure how much of your genetic ethnicity comes from each of these regions. 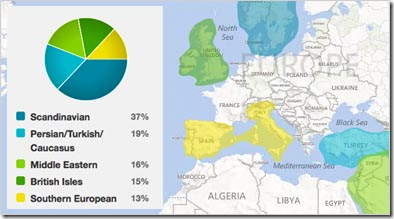 This can be quite difficult. Over the centuries DNA gets spread around a lot. So determining what constitutes a Scandinavian, for example, is difficult. There is no such thing as a 100% genetically pure Scandinavian.

An additional challenge is determining the genetic makeup of people in these regions in the past. Ancestry is in a better position to determine this because, unlike most genetic scientists, Ancestry has DNA samples linked to compiled pedigrees.

Ancestry attempts to identify reference persons from among their participants. (Is that what they called them? I can’t remember.) A reference person’s ancestors are all from the same region. (I think they looked at the eight great-grandparents, but I don’t remember for certain.) The more reference persons they can find for a region, the better they can isolate signatures that differentiate a person with ancestry from that region.

Consequently, the more participants that take an Ancestry DNA test, the higher the likelihood that they can properly identify your genetic ethnicity. They are especially interested in reference persons.

Ancestry can thus continually increase the accuracy of their ethnicity calculations. And as they do so, they will update your test results without further charge.