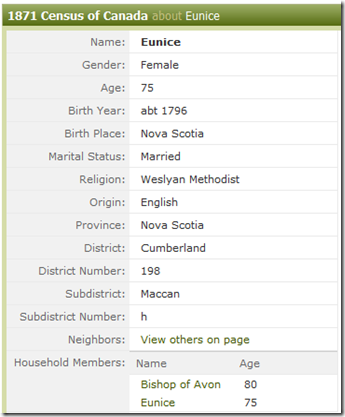 Reader Betty Martin shared with me an indexing error that may well start one of those dubious family legends.

Betty’s gg-grandfather was Aaron Boss, a Wesleyan Methodist who, with his wife Eunice, had raised a family on their farm in Athol near Maccan, Cumberland, Nova Scotia. In “Oral History of Early Athol,” H. R. Baker wrote of the family:

They also had an excellent farm and were thrifty
well-to-do people. I spent two days with them once
when a boy, helping to put in the spring crop. They
were wonderfully religious people. If I remember
correctly, we had worship morning and evening. First
the father would pray – and such praying I have
rarely heard since. His whole frame swayed and shook, and his voice
rolled aloft in a great volume which fairly stormed the gates of
Heaven. Then the boys followed, more quiet, but none the less
fervent and earnest, and when we arose from our knees every face
seemed transfigured and aglow with Heaven's light. They were great
friends and supporters of Methodism in those early days when
Methodism was young and comparatively poor and small in numbers.

With this background, Betty was amused when she eventually found Aaron in the 1871 Canada census.

Searches for Aaron Boss turned up nothing.

Using good search strategy, she next searched for members of Aaron’s household. A search for Eunice Boss had previously returned nothing. Finally a search on just her given name located Eunice.

“There was Eunice living with the Bishop of Avon in Maccan!” wrote Betty. (See the screen image, above.) While she knew Methodists have bishops, she was quite certain her gg-grandfather had never been one. She also wondered where Avon was located.

Armed with a subscription to Ancestry.com, (the image is unavailable on FamilySearch.org) she viewed the original record. She calls what she found “a very creative transcription error.”

The obsolete form for double s, so often mistaken for a p, had somehow induced the indexer to read “Bishop” instead of Boss. And “Aaron,” possibly written as Aron, had been read “Avon.”

“What fun!” she wrote. “I can hardly wait until word gets out to the family that our Aaron Boss was the Bishop of Avon!”