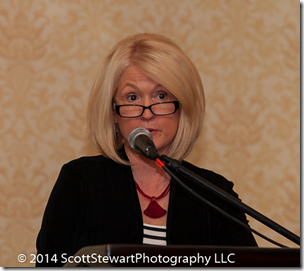 Attending a national conference is not complete without attending a session from each of Tom Jones and Elizabeth Shown Mills. The Mills session I attended was in a huge room. We filled every chair and then turned people away. I’m guessing that 50% of all those attending the conference that day tried to attend that session.

Mills spoke to the topic “Using Evidence Creatively” at this year’s annual conference of the National Genealogical Society.

Mills started by having us imagine we were in a thunder storm. Benjamin Franklin was in that situation and looked at it in a whole new way. “Creativity in genealogy doesn’t mean creating evidence,” she joked. It means devising new ways to look at our evidence, form hypotheses, and test those hypotheses.

Let me share a few thoughts and quotes from her presentation.

We need to be thorough.

“Innovative ideas require a good, sound store of both information and knowledge.”

We get some evidence from records that don’t even mention our ancestors. It is called indirect evidence.

“Names the same, doesn’t mean the person is.”

Tax rolls might have clues showing a person’s neighbors. Even alphabetized lists might indicate the date that the tax was collected.

Dr. Alex Osborn in Applied Imagination said to let your imagination be guided by stabs such as “what if” and “what else”.

When it comes to problem solving it is not a matter of whether we will find evidence—we’re going to find evidence—but if we can recognize and fully utilize it.

Her presentation reminded me of a column Mills wrote in the New York Times last November. Readers sent in questions and she responded. One reader from Alexandria, Ky. had a letter from his grandmother, some family lore, and a mention in the 1920 census. He wanted to find her birth and marriage records. In her response we see some of the creativity Mills mentioned in her lecture. She said, in part,

What exactly does your grandmother say in that letter? Did she include a return address? Does she mention any other person or any event that had just happened in her life? To whom did she write the letter? Where did that person live? Do you know the identity of any sibling, parent or other kin? Do you have your grandmother on the 1910 census, taken just four years after she wrote that letter? If so, who did she live with? What was her address?

Read the entire response on page 2 and page 3 of the article on the New York Times website.

Then, try to stay dry in that rain storm.