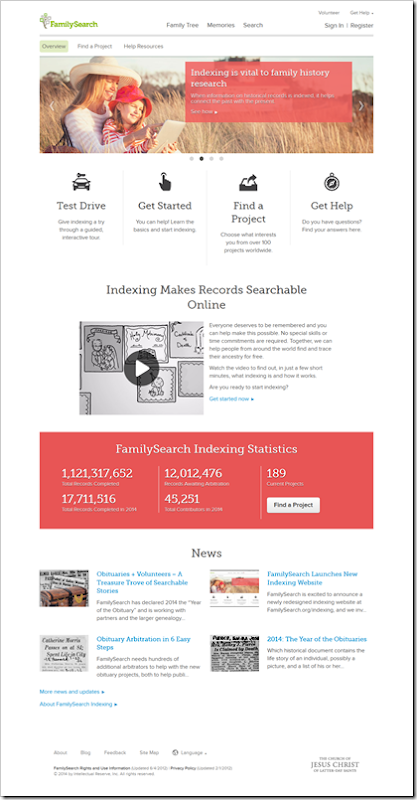 The new indexing program is still a work in progress, said Flinders. He gave us a walk through like you do with a home during construction. Imagine a program where partners (like archives and societies) create and manage their own indexing projects. Imagine users being able to share an image with other indexers to ask opinions on what is written. And the system knows when you’ve got enough experience to serve as an arbitrator and invites you to become one. Imagine a user who finds a record on FamilySearch.org being able to send a thank you note to the indexers. I wasn’t certain if Flinders was saying that the new program would be able to do all these things, or if he was just getting our creative juices flowing.

The new program will have a number of key improvements according to Flinders.

Some of the new features are already live, said Flinders. On FamilySearch.org click on Indexing. There you can see real-time statistics and enhanced tools for finding an indexing project. 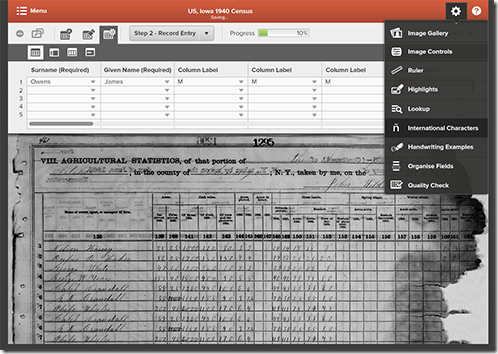 Flinders gave us a tour of a beta of the program.

The new program has a new workflow. I didn’t catch if it is a replacement, or an alternative to the current A/B/arbitrate flow. The new flow is called “A + Review.” One person indexes. A reviewer checks all fields, looking for and correcting errors. If they change less than a certain number of fields, it is allowed to go on, otherwise, it goes back to another indexer. The new flow is at least 30% more efficient, said Flinders. 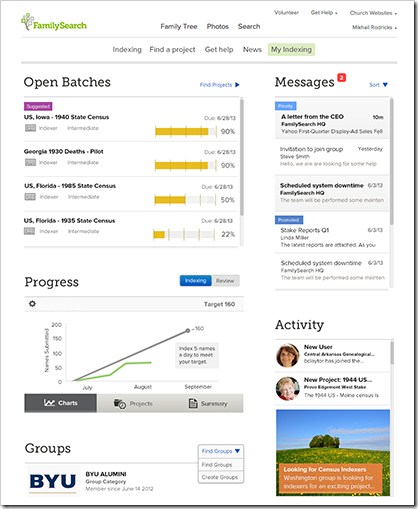 The new program adds a My Indexing page. This is a replacement for the first screen of the current indexing app. It lists your open batches and their percentage completion. It has the system messages. Scroll down to see a progress graph, a list of groups that you belong to, and an activity feed. The feed looked a bit a Facebook or Twitter list of items, happenings, accomplishments, and the like.

Each group has its own home page, which also struck me to be a bit like Facebook pages. It would have a group progress graph, a list of group members, and I think their roles. (The term arbitrator has been replaced with reviewer.)

The system will have new roles. (indexer and arbitrator are example roles from the current system.) New roles are setup and linking. Those doing project setup identify non-indexable images and divide images into batches. Linking matches existing indexes to images.

Flinders told us the roadmap for the project. An alpha version of the core indexing experience is done. During the first half of the year they are finishing up the features shown today. (I might add a reminder that this was a “house under construction walk through.” I always take these feature lists with a degree of skepticism.) The current target is to have the new program in the second half of the year, perhaps August. There will be a period of time during which the two systems will coexist during project completion and indexer transition.

In a move to give subtle preparation to the appearance of the new system, FamilySearch will introduce a change at the end of February to the current indexing system. It will get a really minor facelift, including a new font in titles, the new FamilySearch logo, a new green bar with batch name, and other fine changes that are in line with the new indexing system.