In my article “Monday Mailbox: How Fast Was the 1860 Census Indexed” I talked a bit about Ronald Vern Jackson and Accelerated Indexing Systems (AIS). I solicited additional information and several readers came through.

Ron hired BYU [Brigham Young University] students to extract the census records as well as others.  Others created the sort cards sometimes using BYU sorters to alphabetize the indexes.  I believe it was the 1830 census that I obtained for him which had already been published.  He used this book to publish his own.

Those AIS indexes in the big heavy volumes were an absolute lifesaver in their day!!   They helped me solve quite a few puzzling lines of my ancestry.   Now I'm thinking that maybe they would help overcome the occasional riddle as to why I can't find a particular name in a census on FS or Ancestry.com, because of bad handwriting or errors in indexing.   Are they available anywhere electronically?    I'm not sure the microfiche are still known by current FHC staff?

That’s a great idea. There’s a definite advantage to multiple indexes, and with HeritageQuest retiring their indexes in favor of Ancestry’s, we’ve recently lost a valuable “second opinion.”

You might be right about new family history center staff members, but many staffers are in their older years and well remember the AIS fiche. The real problem will be centers that threw out the fiche or fiche viewers, not having the insight you’ve just shared.

Another reader, Kath Baker, sent me an email pointing to three sources of information.

His obituary appeared in the Salt Lake City Deseret News:

SALT LAKE CITY-Ronald Vern Jackson, age 53, died Wednesday, Nov. 4, 1999 at his home in Salt Lake City, Utah.… He was a world renowned expert in genealogy and was the author of numerous publications. He loved his grandchildren and cherished the time he spent with them…1 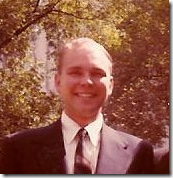 Kath sent a link to Ron’s persona in FamilySearch Family Tree: Ronald Vern Jackson (KW4T-DLD). It includes several photographs, including the one to the right.2

An article concerning his estate was published in a Texas newspaper:

Regarded as probably the best-known of American genealogists, very little is known about Ronald Vern Jackson. Save for one thing.

When the Salt Lake City, Utah resident died in 1999, he left a percentage of his business fortune to the genealogy division of Montgomery County's library system. But it wasn't until 2004 that the county became aware of the gift.

Two years of legal wrangling between Montgomery County and Jackson's heirs ended Monday when County Commissioners agreed in executive session to accept a settlement of $128,773…

“I do not know what the size of the estate was, but I do know the will was not probated” by Jackson's six heirs, [County Attorney David] Walker said.3