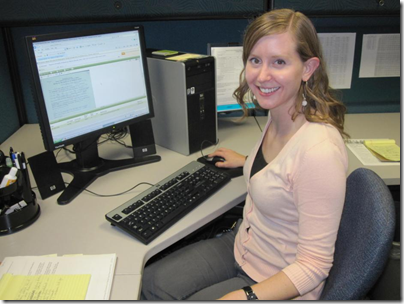 2010 photograph of NARA Digitization Project Manager, Erin Townsend,
viewing newly digitized and published records on Ancestry.com.
Image credit: NARA.
“We are pleased to announce the renewal of our digitization partnership agreement with the National Archives and Record Administration,” said Matthew Deighton, Ancestry.com spokesperson. The essence of the agreement is that Ancestry pays for, digitizes, and indexes records for the National Archives and Records Administration (NARA). Ancestry’s subscribers and NARA visitors get exclusive access to the digitized records for five years. NARA calls it an embargo period. Then NARA can release the records free to everyone.

Embargos are already starting to expire on  early partnership projects. According to NARA, they have published 5.25 million images on their website. NARA uses a different paradigm than other companies for publishing online record collections. If I understand correctly, records must be accessed through their catalog.

Digitizing originals can be quite expensive, so Ancestry, and by extension all you Ancestry subscribers, are to be applauded. You’re making a difference. “With investments in scanning and indexing reaching more than 1 billion records, we have saved taxpayers more than $100 million dollars at commercial digitization rates,” said Matthew. If my math is correct, that means it would cost NARA $10 to scan and index each record. (Wow! If that is the case, FamilySearch is underpaying its indexers. Oh, wait… Never mind.)

The renewal comes despite an incident in March. An Ancestry employee was caught throwing away NARA documents rather than digitizing them. (See “NARA Suspends Ancestry.com Scanning Operation” on my blog.) I’ve never seen any other public information on the incident. Obviously, if NARA has renewed the agreement, Ancestry must have cured any weaknesses in their processes.

Ancestry began digitizing NARA microfilm back in 2000. They began scanning original paper documents in 2008. In that time they have published 1,371 collections from NARA collections, containing over 170 million images and more than 1 billion records.

“This agreement marks the renewing of a great partnership and we are proud to continue our relationship with the United States National Archives and Record Administration,” Matthew said.

Partnerships are a key part of NARA’s digitization plan. More than 97% of the documents scanned at NARA are done by partners. It appears genealogy companies are doing the lions’ share of that. That mirrors user requests. NARA recently asked what people wanted digitized the most. “Overwhelmingly, people asked us to digitize records of genealogical interest,” said NARA’s Denise M. Henderson. “[Requests] include… immigration and ethnic heritage records; [and] military and veterans records, especially those from World War I and II.”

Among the records NARA will focus on (not necessary via Ancestry) for the next 18-24 months are: