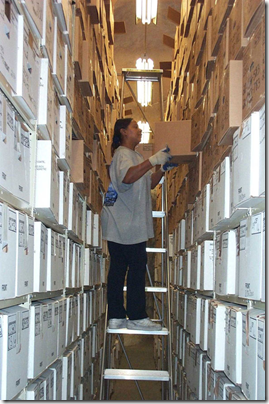 On 16 March 2015, Twitter user “RM Cooper” posted, “Ancestry’s doing a digitization project with our WW2 records. Person caught ‘improperly handling/attempting to destroy’ attachments to WW2 registration records. Ancestry canned them and they’ve been barred from NARA. So they’ve suspended those projects while they attempt to assess what’s been done and how/if they can fix it…I just hope it was an isolated incident and the person didn’t really get to destroy anything.”

In a copyrighted story on the St. Louis Post-Dispatch website, Tim O’Neil reported that the Ancestry.com employee was behind in productivity and attempted to catch up by throwing away some records. National Archives and Records Administration (NARA) staff recovered all the lost records. NARA suspended Ancestry.com projects at five sites, including the National Personnel Records Center in St. Louis, where the incident occurred. NARA has since allowed Ancestry.com to resume operations at two sites.

You can read O’Neil’s entire article on the St. Louis Post-Dispatch website.