“It took us several decades to find my grandfather’s family,” Donna says.  “Why? His parents divorced before 1902, when he was very young, and his mother moved them to New Mexico from Texas and remarried.”

She was able to locate her great-grandfather’s death certificate. But the information was sketchy: 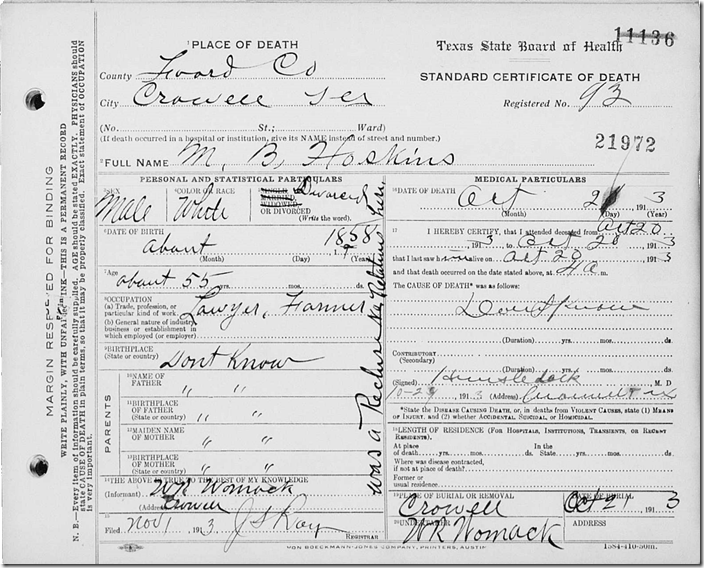 He was known in town only as M.B. (Family lore has it that he went by his initials so as to give more prestige to his position as a lawyer.) His age was unknown. His birthplace was unknown. No information was known about his parents.

The information was so sketchy, the informant seemed compelled to explain why in a marginal notation: “Was a Recluse. No Relatives here.” The informant was the undertaker. Sadly, the only thing that seemed to define M.B. to his fellow citizens was his divorce.

Now in my opinion, the information is not only sketchy, it is sketchy. The date of death has obviously been “corrected” and the date of the doctor’s signature may have been as well.

The cause of death is “Don’t know.” The signature of the town doctor, Hines Clark appears sketchy:

On other certificates from around this time it appears like this:

Donna’s grandfather was just a teenager when his father, M.B., died. “He was sent by train to attend to his estate, finding on arrival other relatives had come and gone,” Donna says. “Yes, all of the money and negotiables were gone.”

Thank you, Donna Hoskins Backus, for sharing this record.