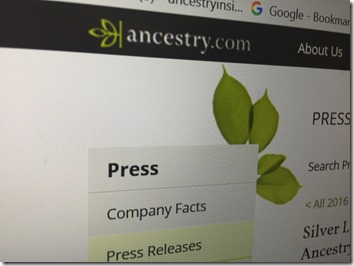 Ancestry.com LLC announced last Friday that an investment firm, Silver Lake, has purchased some of Ancestry. You and I can’t buy shares in Ancestry—at least not directly—because Ancestry is not a public company. But that doesn’t mean that no one can buy shares. Firms with many millions of dollars sometimes can buy portions of Ancestry. To facilitate the transaction, the parties involved have to come to agreement as to the value of the company so that the value of the shares can be established.

This sale established the current value at about $2.6 billion dollars. You may recall that is the value I calculated last year when rumors began to circulate that Ancestry’s investors were hoping to sell portions of the company. (See “Owners of Ancestry.com Hoping to Sell.”) That is up quite a bit from the valuation in 2012 when Ancestry was valued at $1.6 billion. That valuation occurred when Permira bought a majority share of Ancestry. (See my story, “Ancestry.com Sold for $1.6 Billion.”)

Ownership of Ancestry is now shared among several large shareholders. The amounts sound like a story problem. After the sell, Silver Lake will own the same amount as GIC, an existing owner. Added together, they own less than 50% of the company. However, when GIC’s shares are added to other existing owners, Permira funds, Spectrum Equity, Tim Sullivan, and Howard Hochhauser, this group of investors owns more than 50%.

Ancestry now has more than 2.2 million paying subscribers across all its websites. They include Ancestry.com, Archives.com, Fold3.com, Newspapers.com and AncestryDNA. They contain more than 17 billion digitized historical records. They host 78 million family trees and have more than 1.5 million DNA samples.

Silver Lake owns $24 billion in assets. Among the companies they have invested in are Dell, GoDaddy, and Motorola Solutions. GIC manages the foreign investments of Singapore, amounting to over $100 billion US dollars. Permira owns $28 billion US dollars.