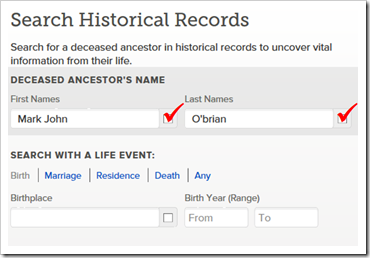 FamilySearch recently tuned the Exact setting of its search system. Next to each text field in the FamilySearch search is a little square. Checking that box invokes exact mode. But what does that mean? The question is not as simple as you might think. Ostensibly, searchers want records that exactly match what they type. But when asked the following questions, most changed their minds about how the exact mode should work.

1. If you enter Howard as the first name, do you want exact search to match records with first name HOWARD as often occurs in electronic databases? What about O’brian and O’Brian? What about “de la Vega” and “De la Vega”? When quizzed specifically, most searchers want exact, except for case.

2. If you enter “de la Vega” as the last name, do you want exact search to match records keyed as “Dela Vega” or Delavega? Most searchers with European ancestry want exact to also ignore spaces in names.

3. If you enter José, do you want exact search to match records without the accent (Jose)? Most searchers say yes.

4. If you enter O’Brian, do you want it to match records keyed as OBrian? Most searchers say yes.

With these changes, FamilySearch exact mode now returns exactly what you enter, with those four allowances: case is ignored, spaces are ignored, diacritical marks are ignored, and punctuation is ignored.

5. If you enter first names “Mark John,” should it match just Mark? Just John? It used to.

7. Should “Mark John” match “John Mark”? It used to. I talked to a researcher recently who found that to be a common practice in a certain area he was researching in.

“We were trying to be too smart and guess what would be most valuable to the user,” said Robert, “and that unfortunately took power away from the user and caused a lot of confusion about what ‘Exactly’ the system was doing.”

With these changes, FamilySearch expects the behavior of the system will match the expectations of most searchers.