It Keeps Ancestry’s Kendall Hulet Up At Nights -- #RootsTech 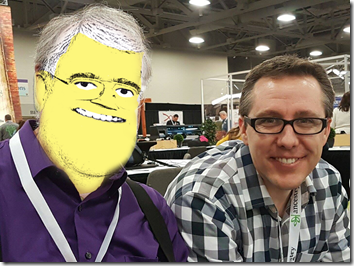 I had a chance to speak with Ancestry’s Kendall Hulet at RootsTech 2017. Kendall has been with Ancestry since about 2003 and has risen to the position of senior vice president of product management.

I asked Kendall what keeps him up at nights. “Protecting people’s privacy and the security of their data,” he said. Ancestry is making massive investments in this area. He said it will probably always keep him up. He warned us as well. “Be super careful with your data because it is your DNA and you just need to be thoughtful about it.” Privacy is one reason Kendall gave for the lack of an AncestryDNA chromosome browser. (He warned that he would probably butcher technical information about DNA. I know less than he does, so please add comments to correct me. Anyway…) He said a chromosome browser exposes actual SNPs (“snips”) for your matches. Ancestry has to be really thoughtful about doing that. They have to decide if that makes sense. Ultimately, people’s privacy is more important than a chromosome browser, he said.

According to Kendall, another reason Ancestry doesn’t offer a chromosome browser is something called pileups. You share 50% of your DNA with a banana, so obviously you share a ton of DNA with other people. Kendall said some people are attempting to triangulate on places that are pileups where a lot of people match. “It’s not because they are really amazing matches; it’s actually just because you are humans or you both happen to be from the same rough area of the world,” he said. So while Ancestry has had extensive discussions internally about such tools, users may inadvertently focus on pileups and not know it. “You think it is telling you something interesting and it’s not,” he said. “You really have to know what you’re doing.”

Kendall said Ancestry offers two alternatives. He explained that since they have 3 million people in their database, they can analyze across millions of people to determine what are pileups and what are not. They then identify matches in common with you. When you view a DNA match, select Shared Matches to see a list of users who share SNPs with you and that DNA match. The other alternative is DNA Circles. Circles have diagrams showing matches between your matches.

[Below is an example from the Insider’s DNA. I share DNA with DF and our common ancestor, Julia Ann Hammer. Ancestry doesn’t disclose the particulars other than indicating we share 8.9 centimorgans on one DNA segment. You can see that DF and BJ do not match because there is no line between them. ] 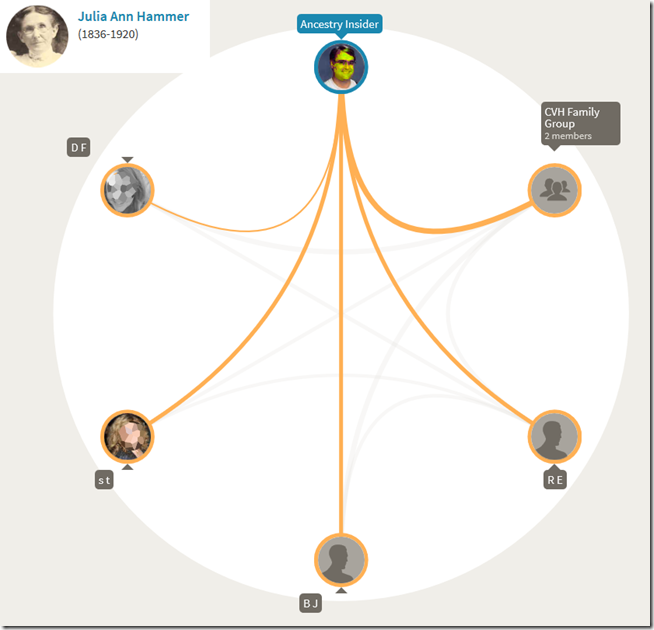 The other thing that keeps Kendall up at nights is “somebody we don’t see coming, from a business perspective, with a disruptive approach to things.”

Kendall said that DNA could have been that thing, but Ancestry has successfully turned it into a “massive, positive thing.” They are poised to release Genetic Communities (see Tim Sullivan’s announcement). The feature shows migration patterns for groups of people at a much finer level than gross ethnic origins. “It is very rich in telling the story of these people and how you connect into them and how they’ve moved over time,” Kendall said. “I think it is going to be a game changer for DNA and family history.”

They hope to accomplish another game changer for the casual DNA test taker. Kendall said that while lists of matches are great for the family historian, Ancestry wants to make DNA more fun. A lot of people they talk to just want to see a bunch of photographs of cousins to see how much they look alike. “Ultimately, what we want to do is have a more social experience where people can connect to each other,” he said.

“If you could achieve great handwriting recognition, it’d be a game changer for the industry,” Kendall said. “That’s the kind of disruptive thing that could be crazy interesting.” [I know FamilySearch has said it would take 300 years to index their collection using human volunteers.] Kendall said that handwriting recognition would be incredible. “It’s the holy grail.”

Kendall said that if enough descendants of a deceased person were to take a DNA test, Ancestry may eventually be able to reconstruct a significant portion of that person’s DNA. That might tell you all sorts of interesting things, like eye color or if they suffered from male pattern baldness. “Who knows. Maybe you could try and figure out what they looked like,” he said. “That’s like crazy way out there.”