Rolling in the Aisles Comedy at RootsTech 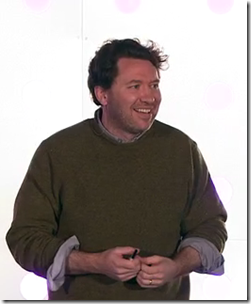 He was one funny guy. We were rolling in the aisles. I’m not talking about the Thursday evening comedy performance of Ryan Hamilton (although that was rolling funny as well).

No. I’m talking about the Friday morning keynote session of Josh Coates, “Exabyte Social Clouds and other Monstrosities.”

Coates, was the founder of cloud backup company Mozy.com and is currently CEO of Instructure, an education-focused software company.

In less than 60 minutes Coates walked us through social networking, exabytes of storage, and cloud computing.

A scientist named Dunbar studied interactions among monkeys and found they could integrate no more than 148 other monkeys in their social structure. Later scientists extended the study to humans and decided we weren’t much better, upping the number to 231. He joked about people on Facebook claiming more friends than that. And if you have less friends? You should be more friendly.

The idea behind a social network is that you link people together electronically, and really amazing things can happen. Take Wikipedia for example. Coates thought the idea would fail.

“Never underestimate the tenacity and drive,” he said with a long pause, “of unemployed PhD graduates.”

While there will be another Facebook at some point in the future, don’t bother trying to be the one that gets rich creating it. There are several necessary requirements that you are unlikely to meet. You won’t be able to achieve critical mass—that is, having enough participants for the network to have value. It costs too much to acquire users (even free has costs in time and effort). And you won’t be able to provide users a compelling reason to return.

No small special interest group will ever make one work. (Say, genealogists?)

The humor sprinkled throughout the presentation is illustrated by one of his slides. Right in the middle of a series of slides, up popped a slide about zombies. He paused. 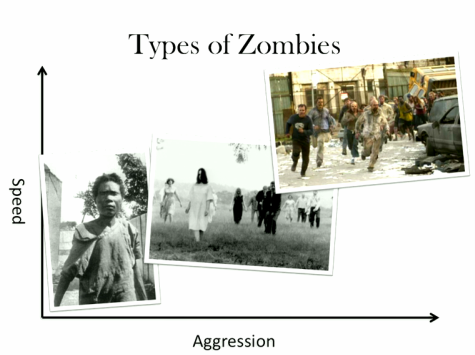 Coates went on to illustrate the size of an exabyte.

Finally, Coates talked about “the cloud.” Cloud computing is a metaphor. He compared the cloud to electric utility companies. In the early days of the industrial revolution, manufacturing plants had their own power generators. They had to generate their own power. That required tons of equipment, large costs, and wasted capacity. With the development of power companies, factories could buy their electricity for a fraction of what it cost to generate it themselves.

That is what the cloud is like. We buy electric power from the cloud. Even computer servers can be marshaled from the cloud. And the cost is pennies on the dollar of running your own data center. A teenager can assemble a super computer in his room for a few hundred bucks. Really.

We live in a day when amazing things impossible just five years ago, are possible today.

In closing, Coates brought it all together in one question.

“The question of the era is, ‘what would you do with unlimited bandwidth, storage, and CPUs?’ No other generation has had this question posed to them. It’s a pretty heavy responsibility.”

“What are we going to do with this?”

(The zombie slide was actually an inside joke, perhaps known to no one else in the room. Coates had previously done a comic presentation including the slide. See “Effective Tactical Responses in a Post-Apocalyptic Environment.”)