Bill Mangum–What’s New with FamilySearch in 2012? 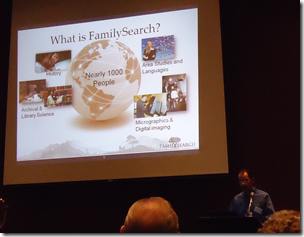 Bill Mangum, nine years with FamilySearch, did a great job. Once again, the problem is me. I follow these organizations so closely, that what is new to the general public is not new to me. Unfortunately, at the St. George Family History Expo when I saw a class titled “What’s New With FamilySearch in 2012,” I thought I’d get a vision of what was coming in 2012.

The class could have been titled “What Was New at FamilySearch in 2011.”

Still, there were some forward looking statements.

“FamilySearch will soon provide you with more options for deciding which matching requirements you want to use.” Today, each field in the search form has a little checkbox which activates “exact” matching for that field. “Shortly you will be able to specify Exact, Exact+Close or Exact+Close+Missing on a field by field basis.”

I’ve mentioned before that FamilySearch was replacing its Flash image viewer with an HTML viewer while Ancestry.com was switching the other direction. Flash is a special technology that requires the addition of a browser plugin. Unfortunately, it doesn’t work in some libraries that don’t allow plugins. It also doesn’t work on many hand-held devices. HTML is a standard that requires nothing more than a current browser like Internet Explorer, Firefox, or Chrome. The new FamilySearch image viewer does everything the old viewer did save two things: it doesn’t have a thumbnail and it doesn’t allow printing of a rectangular portion of the screen.

FamilySearch plans to translate their wiki into different languages. It currently has 65,000 articles and 40 more are added every day.

FamilySearch would like to catalog all the holdings of the family history centers. They would also like to digitize the unique resources of each.

Online film ordering (FamilySearch.org/films) is available now pretty much anywhere but in the Northeast. Speaking of film, as of 15 February film rental prices went up. Short term loans are now $7.50 and extended loan costs $18.75.

There are 125,000 active volunteers indexing over 125 projects. About 200 million names are indexed per year.

In his subsequent session, “FamilySearch Global Initiatives,” Mangum shared a couple of stats you might find interesting. Nearly 1,000 people work for FamilySearch.