I recently experimented with the FamilySearch watch feature of Family Tree (and legacy new.FamilySearch). You can indicate which people in your tree you wish to watch. Then each week you receive an e-mail detailing the changes. Here’s an example of the e-mail. 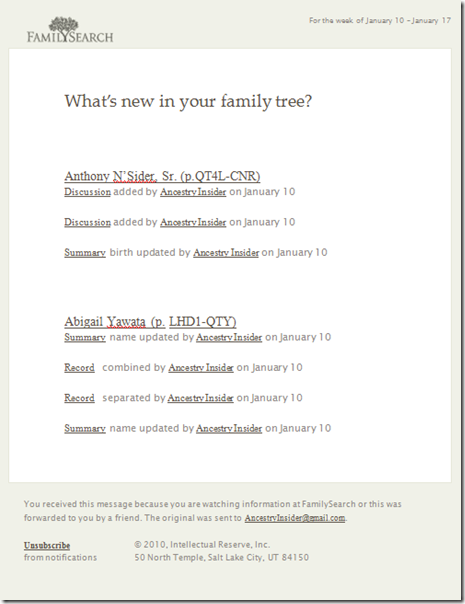 I continue to be amazed at FamilySearch’s tenacity in ignoring its users needs and feedback. With genealogy’s appeal to an older audience, it defies logic that FamilySearch continues to use a low contrast user interface. Light gray on white? Dark grey on light gray? Genealogy is hard enough. Why make it difficult to read the screen?

The premise behind watch is more powerful. This feature is another in a series making the FamilySearch Tree—a common pedigree of all mankind—more wiki-like. I’ve written before about Ron Tanner’s presentations on the subject. Like Wikipedia, the idea is to let anyone add to or fix anything. Most people I talk to don’t believe the concept will work. I happen to be one that hopes it will.

This works well for a neutral-point-of-view encyclopedia, as both sides of an issue are appropriate for inclusion in an encyclopedia entry. But it may not work so well for the FamilySearch tree. The tree designers have designated some facts as having a primary value and alternative values. They think that there is always one best, right answer that genealogists can decide upon. That’s pretty naïve.

That brings us back to gray on gray text. FamilySearch’s tenacity in ignoring its users will spell certain failure for a wiki-type common pedigree.