The FamilySearch Indexing and Linking Tool

Grant Echols, principal engineer at FamilySearch presented “The FamilySearch Indexing and Linking Tool” at last week’s RootsTech conference. FamilySearch is working on a tool to link indexes to images. The tool is needed because the FamilySearch International Genealogical Index (IGI) did not have images. FamilySearch has published record collections from the extracted vital records contained in the IGI. Examples are

The Indexing and Linking Tool associates images to names. The tool displays a list of names that were indexed off a roll of microfilm. And it displays successive images from the microfilm. The operator places a rectangle around each record on the image. Then the operator drags and drops to connect names listed along the left side of the screen with the associated rectangles. 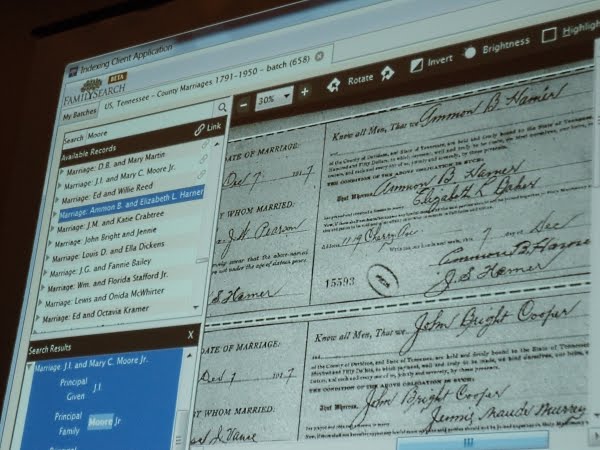 There are known problems with the indexes. They are the result of single keying, additional fields need to be keyed, and some records may have been missed. Associating the indexes to the images brings greater value to the existing collections, but they will ultimately have to be reindexed. The current indexes will be used as the A Key. Not all fields will be reindexed, as fields like sex have a high degree of accuracy already.

The tool is currently in private testing. There is currently about 14 users working on 3 projects. It will soon begin beta testing. It will be invitation only.

The tool requires a high speed internet connection, as images are downloaded during the linking process.

Echols said the tool will be released later this year, after the 1940 Census has been indexed. He said the 1940 project will start in April and is hoped to be complete in ___ months. (Bloggers were told in our pre-conference dinner that FamilySearch is not ready to give an estimate, so I’m redacting Echols’s comment.)