“Legacy GEDCOM has done a great job,” said Ryan Heaton, “but it’s time to move on.” 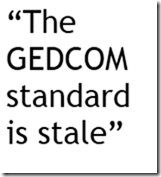 To be useful, a standard has to be adopted by a lot of different people. It must meet their needs.

“Nobody is as smart as everybody.”

FamilySearch has been working on a new GEDCOM for the past year. The proposed name is GEDCOMX. “We’re not here to announce that the standard is here and ready to go.” That’s why we’re here talking about creating a project.

I was not able to attend the second session, which was titled “A New GEDCOM: Tools, Syntax and Semantics.” The class description stated, “The GEDCOM standard is stale. What would a new GEDCOM look like in terms of its syntax and semantics? What tools would be made available to promote and apply it?”

Perhaps he will go into detail on a couple of comments Jay Verkler made in the keynote. Accordidng to Verkler, a new GEDCOM will include three things: 1. an exchange mechanism. 2. an API standard 3. a repository model.

Heaton went on to talk about some software development stuff. The rest of this article may not make any sense otherwise.

There is a project set up on GitHub, a popular tool for collaborative development. The results of the user documentation is on a website. The code is all available openly. Three websites are now public.

FamilySearch has not yet funded personnel to work much on this, so don’t expect too much while FamilySearch is ramping up.

“This project is not one that is going to fall by the wayside,” said Heaton. “We are really committed to this.”