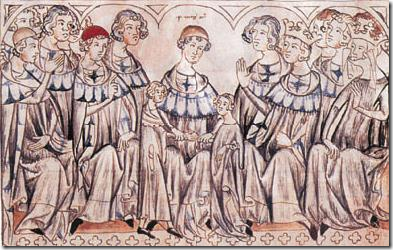 I am told that some of the worst IOUSes in New FamilySearch (NFS) are European medieval royalty.

An IOUS is an Individual Of Unusual Size. IOUSes are individuals in NFS that were formed by combining many like people from multiple trees. NFS retains all the separate contributions inside the individual, so the more the matches, the larger the size of the combined individual. If an IOUS becomes too large, it can crash NFS, so FamilySearch caps their size and does not allow them to be combined with other duplicates.

That some of the worst IOUSes in New FamilySearch (NFS) are European medieval royalty makes sense, as thousands of submitters to Pedigree Resource File are descendants of them.

There are 339,786 people currently in the Royal and Noble… Tree. No doubt all those individuals are also in Family Tree at least once, and some perhaps a dozen times. That’s easily a million people in Family Tree that need to be cleaned up. How long will that take? If you do the math, it would take one person working full-time for 40 years. More likely would be a thousand people spending a couple of hours a week. It would take them over 10 months.

Remember that there are hundreds or even thousands of incorrect trees on people’s desktop computers that are regularly being synchronized with these people in Family Tree. I’m trying to keep just one person clean in Family Tree and every month or so I have to spend a half hour repairing damage and communicating back and forth with the person(s) to prevent immediate reversion.

If you do the math it will take 118 people working full time, 24x7, to keep these people clean.

One can argue the assumptions of these calculations, but I think it is clear that it will take significant effort to clean and keep clean royal and noble medieval Europe. If you want to see clean data, consult the FamilySearch Royal and Noble Houses of Europe tree.